Carlmont volleyball struggles in a loss against Aragon 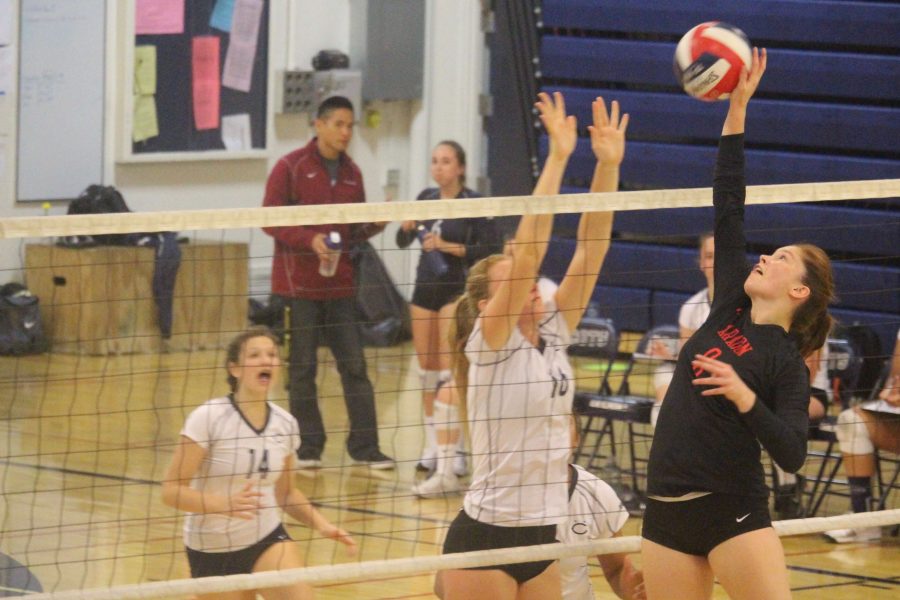 Carlmont varsity volleyball fell to the Aragon Dons after four sets in a match riddled with mistakes on Sept. 22.

Aragon Coach Kelsey Stiles said, “We stayed together as a team even though we were missing our starting outside and our middle got a concussion during warm-ups. I think the girls made great adjustments and battled the entire time.”

Carlmont had a slow start in the first set due to a lack of organization while Aragon came out strong and determined. Carlmont dropped points early as the players struggled to communicate.

Carlmont varsity Coach Chris Crader said, “We have been talking about [our lack of communication] all year and we just have not got it to where we want it to be yet. We keep saying that we need to talk more, but we haven’t been able to do that on the court.”

Despite the initial difficulties the Scots were able to shake off their anxiety and won the first set 25-22.

Unlike the previous set, the Scots started the second set strong with a big lead due to an increase of vocal players. Carlmont swiftly won 25-18.

Junior Maya McClellan said, “I think we lacked communication and focus and everyone was thinking about their own mistakes rather than working together as a team.”

In the third set, senior Anya Meredith hit a hard ball across the court that fell on the far corner line, but the Aragons continued to lead the game 18-16.  Senior Makenna Twisselman, libero, struggled to receive hits from the Dons, however, she persisted with full effort in the game by diving for the ball.

Aragon benefited from Carlmont’s mistakes and proceeded to work hard, earning a 25-17 win.

The Scots and Dons battled in the final set, with the lead going back and forth. Most of the points scored were tips over the net that caught the opposing team off guard. Aragon demonstrated their experience and left their passion on the court, resulting in their win against the Scots.

“I think [Aragon] just wanted a win more than we did. They had more energy and were giving it everything they had,” said McClellan.

This season, Carlmont’s roster has many underclassmen and the players are gaining experience at the varsity level with each game.

“The group that we put on the court has a lot less experience than the group we had last year and they haven’t been in situations like this often. They don’t always react as calmly and excellently as they’d like to. It just takes time,” said Crader

However, the Scots will continue to persevere and strengthen their roster for the upcoming games this season.

Carlmont will play in a neutral tournament at Oak Grove on Sept. 24. Their next league game will be against Burlingame High School Sept. 27 at home.