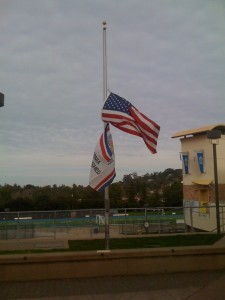 [/media-credit]
This new year so far hasn’t brought much politically apart from violence towards a political figure.

On Jan. 8, Rep. Gabrielle Giffords (D-AZ) was shot in the head; critically injured by alleged gunman Jared Lee Loughner. Loughner also killed six others, including a federal Judge John Roll, a nine-year-old girl, and four bystanders. Thirteen others were wounded.

Loughner, silent since his arrest, was ordered to be held without bail.

Loughner’s parents, who supposedly had a strained relationship with him, expressed in an interview that they “don’t understand why this happened.”

According to Principal Raul Zamora in a statement sent out on the morning Jan. 10, the U.S. flag at the top of the Quad “will fly at half mast… as a mark of respect for the unfortunate acts of violence… in Tucson, Arizona.” The flag will remain like this until sunset on Jan. 14.

Principal Zamora also noted that the thoughts of Carlmont faculty and students, “are with those who have passed or were injured and their families.”