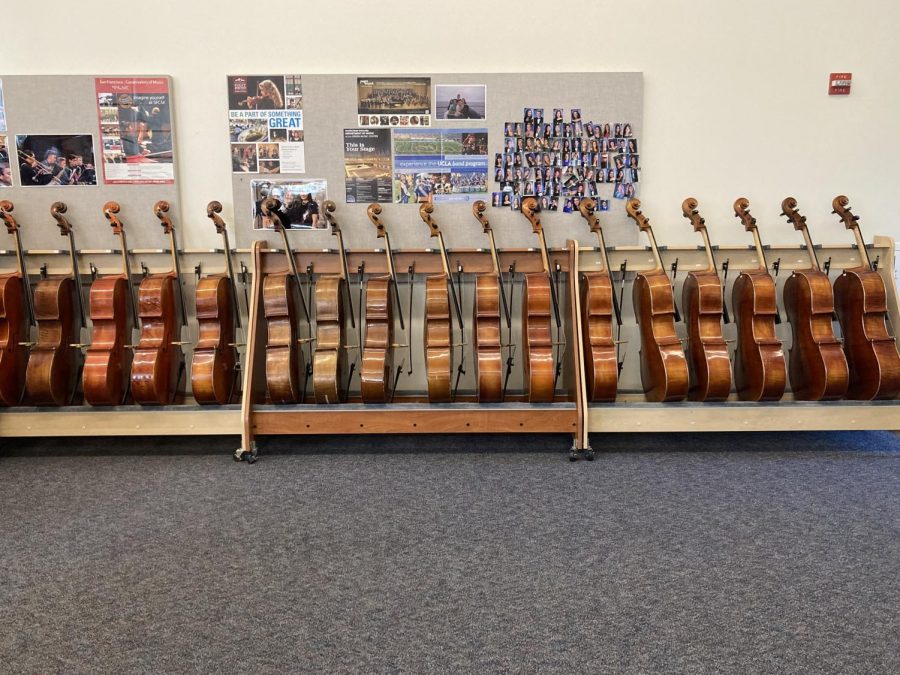 While other instruments on campus are kept at a protective temperature, concerns arise about whether the school’s Steinway grand piano has access to necessary climate control.

As the Sequoia Union High School District (SUHSD) approaches its return to in-person learning, chairs, tables, and bathrooms previously untouched are reintegrating into daily use. However, some school resources remain stowed away, awaiting normalcy.

Among them is the Carlmont music department’s Steinway grand piano.

Since the Carlmont choir’s last concert on March 6, 2020, the Steinway piano has stayed in the Performing Arts Center’s (PAC) orchestra pit, under the stage, tucked away from reality.

Although this might seem like an ideal location, Genevieve Tep, Carlmont’s choir director, expressed concerns for the piano’s safety in January 2021.

“We’ve always had the issue of when no one’s there, they don’t heat or cool the building,” Tep said. “So, when the campus has been shut down for weeks on end, the wood instruments could be exposed to temperature fluctuations and changes in humidity.”

According to the Hollywood Piano Company, owners should keep pianos between 50 and 70 degrees Fahrenheit in 40-45% humidity for optimal performance. However, in Belmont, temperatures can rise above 80 degrees Fahrenheit in the summer months with an average of 80.2% humidity, as stated by the National Ocean and Atmospheric Administration. A climate outside of the recommended range can impact a piano’s tuning and construction, with prolonged exposure resulting in severe consequences.

“Things like changes in temperature and humidity can cause corrosion in the strings, which will have a lasting effect on an instrument. Also, as wood swells and contracts, it can lose its shape,” said Michael Kimbell, a local piano repair technician.

Kimbell and his wife, Edith, have worked in piano service and music composition in the Bay Area since 1979, after leaving music teaching jobs. Having worked on pianos at institutions like the San Francisco Conservatory of Music, as well as in people’s homes, he is no stranger to the nuances of piano care.

“Worst case scenario, the piano’s joints may have stiffened severely,” Kimbell said. “A technician may have to repin and realign all 88 joints, which is extremely tedious.”

Were Carlmont’s piano to endure harmful temperatures in the PAC, the music department would have to weigh the cost of preventative maintenance versus repair expenses, finding a solution that serves best interests of the department and district budget.