Carlmont’s lack of focus costs the team a loss 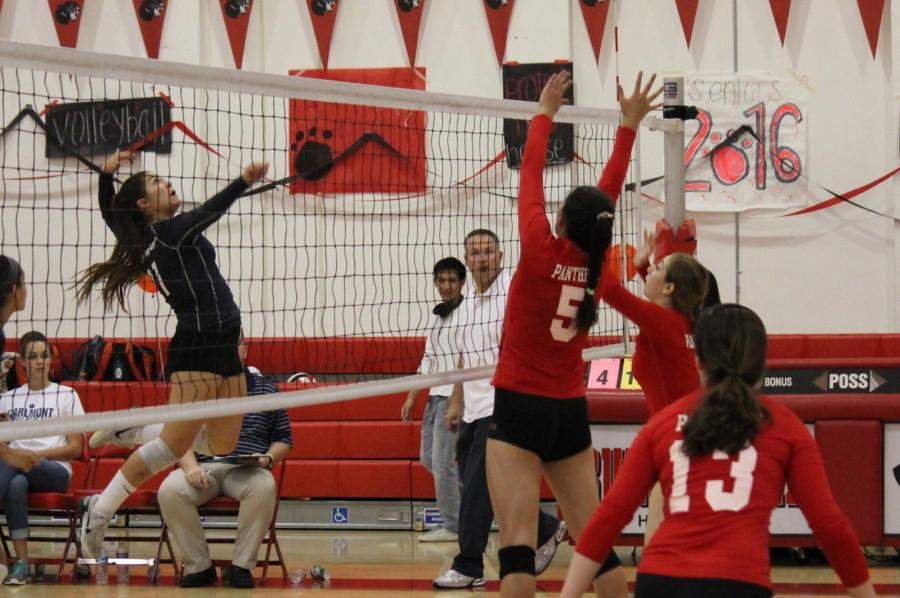 The game started off intense, and the score stayed pretty even all the way through the first set. Players like senior Alexis Morrow and senior Erin Alonso played with an intensity that kept the team in good shape. About halfway through the first set, the Scots’ coach Chris Crader called a timeout. The Scots were trailing 9-6, the momentum having shifted to the Panthers’ side, especially with the crowd riled up. In the end, Carlmont started to gather strength and won the first set with a final score of 27-25.

Although the Scots played well together in the first set, the second set was not as successful.

The Panthers scored many points right off the bat to put them in a lead of 12-5. The Scots called another timeout to get the girls’ heads back into the game.

“The team did show fight to get back in the first set, but there was no focus throughout the rest of the game,” said Crader.

Sophomore Maya McClellan and Alonso fought hard to keep the team alive, but in the end, the team was not in it mentally. The second set ended with a score of 25-15, the Scots on the losing end.

The third set was similar to the second set, in which Carlmont did not have the drive to win the game. Although the game became close with the momentum in the hands of Carlmont, the team was not able to hold the energy and lost the third set at 25-21, Panthers.

“We lacked confidence, and weren’t working hard on the court. We were very nervous and were scared to lose,” said Alonso.

The fourth set was no different then the last two sets. The Scots were mentally down, and were not able to keep up with the Panthers’ front row, with kills coming from Panthers sophomore Natalie Ballout.

Morrow, McClellan and Alonso were working hard to help keep the team in the game, but the Panthers prevailed, winning the set 25-15 and ending the game.

“We didn’t have the drive to win,” said McClellan, “We went in expecting to win, but in the end, gave up.”

The team had just come from a defeat the Tuesday prior to this game, and showed emotion after the loss.

Crader said that the reason for this loss could have been due to unsatisfactory practices during the week: “They were not focused in practice, and it showed up on Tuesday and Thursday. They need the hunger and drive to win these games.”

The Scots faced a tough loss, but look to improve their practice and their play. Carlmont looks  to change their 9-3 record for the better next Tuesday, when they face Menlo-Atherton.