Carlmont’s mistakes total in a loss 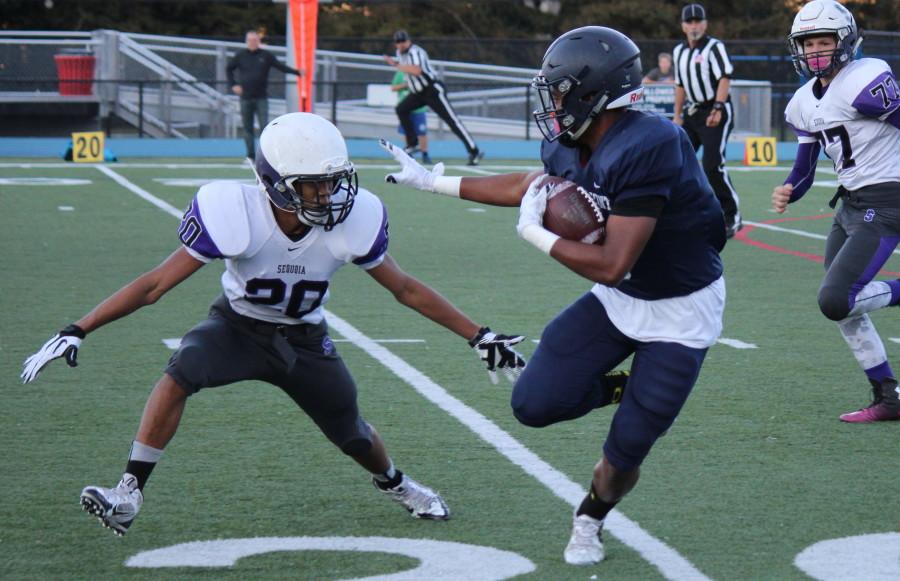 Sophomore Demarii Blanks (5) holds out a hand to push off an oncoming defender.

On Friday, Nov. 13, the Scots were able to hold off Sequoia’s strong offense, but in the end were beat due to small mistakes that ultimately cost the Scots a loss.

The beginning of the game was uneventful; both teams did not score until the second quarter, in which three touchdowns were scored. On both ends, the teams were not able to move the ball well.

With three minutes left on the clock until halftime, the Cherokees scored their first touchdown and scored their extra point, which left the score at 7-0.

Immediately after Sequoia kicked off the ball, the punt returner for Carlmont, sophomore Devon Sagon, ran right through Sequoia’s special team, and scored a touchdown without being touched. The extra point was missed when the Scots attempted to go for two points, and Carlmont was still down, 7-6.

Although players like sophomore Jordan Brandenburg were playing well on the defensive end, the rest of the line was not physical enough.

“The team played their hardest, but our line proved to be weak, and this was our main problem. This reoccurring problem resulted in our team losing,” said Brandenburg.

Sequoia was able to put in one last touchdown before the end of the half, which left the score at 14-6, Sequoia.

The Cherokees started off the second half with a kick into the hands of Sagon, who made another run all the way into Sequoia’s red zone.

The Scots came extremely close to scoring on this drive, but were not able to finish, resulting in a turnover.

After Carlmont’s drive at the beginning of the second half, the game started to become uneventful like in the first quarter until Sequoia scored in the last two minutes to make the score 21-6. The game ended moments after, and the Scots faced a loss to their rivals.

Sophomore Demarii Blanks said, “Our team messed up in key areas, such as our line, who were not able to hold off the Cherokees.”

Even though Carlmont lost to their rivals in their last game of the season, Bruce Douglas, the head coach of the JV side, spoke positively about the team’s performance.

“The team played with heart, and left it all out on the field. The team that makes the fewest mistakes wins the game, and that is what Sequoia did, but the boys didn’t quit, and that’s all a coach can ask for,” said Douglas.

The Scots showed a huge improvement from the beginning of the year, and look forward to the upcoming season in 2016.