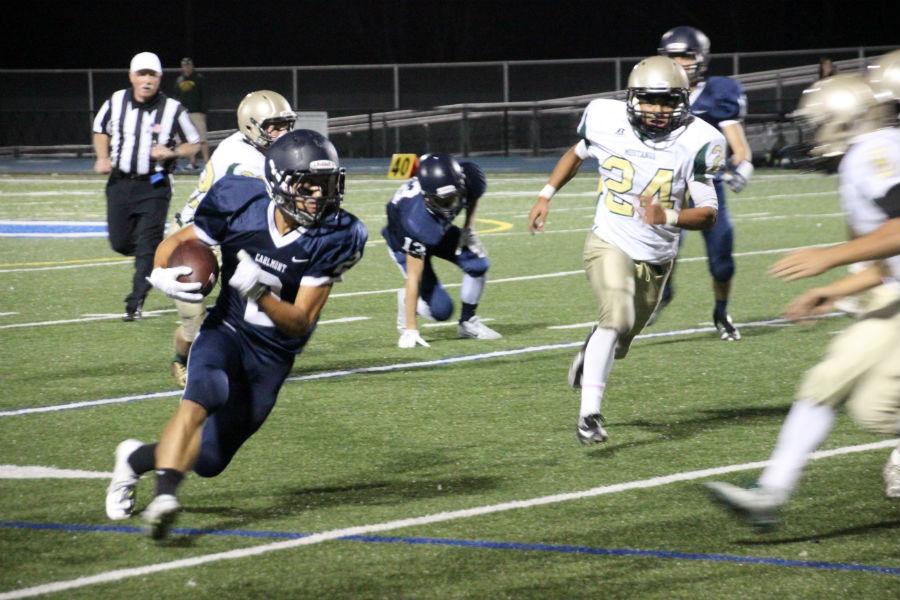 Running back Sami Makaafi sprints down the field, looking for the best way to advance the ball.

Close, but not enough. Varsity football fell short to Capuchino High School in Carlmont’s homecoming game, ending with a final score of 27-14.

“We started out flat, and couldn’t get anything going early,” said defensive tackle Elie Abinader.

Although Carlmont didn’t win, the fans came out pumped up for Friday night’s football game. The stands were packed to the brim with Screamin’ Scots.

The homecoming halftime show won over the crowd.

“It’s so much different during homecoming, it’s much more crowded and the atmosphere is amazing,” said Screamin’ Scots member Aaron Karpie.

The floats crossed the track, the baby powder was flung into the crowd, Drumline gave it their all, the cheerleaders brought in their spirit, and the band played through it all.

“It’s awesome. Everyone comes out and cheers [the whole] game and supports our team even though we [lost]. It’s great to have fans like that,” said Drumline member Michael Muldoon.

Carlmont trailed 20-0 to Capuchino going into halftime, and worked to prepare for the second half.

“We changed up our game plan a little, and came out in the second half with more intensity and fought till the end for our homecoming fans,” said wide receiver Theo Chatman.

Last year, the Scots had a successful homecoming game, beating Jefferson High School 36-20 with the Screamin’ Scots cheered them to victory.

Attendance at every game is guaranteed; the Screamin’ Scots will be there to cheer Carlmont’s team on. “The spirit is great. There is nothing we can do differently; everyone comes out and cheers. We have a good fan base,” said Karpie.

The Scots will continue to work at getting better game by game and avoiding injuries.

“We need to come out on Monday and work hard and get healthy and be ready to ball out next Friday,” said Chatman.

Varsity football will play next at Jefferson High School on Friday, Oct. 25 at 5 p.m. at Jefferson.