‘The Wedding Singer’ is a hit success 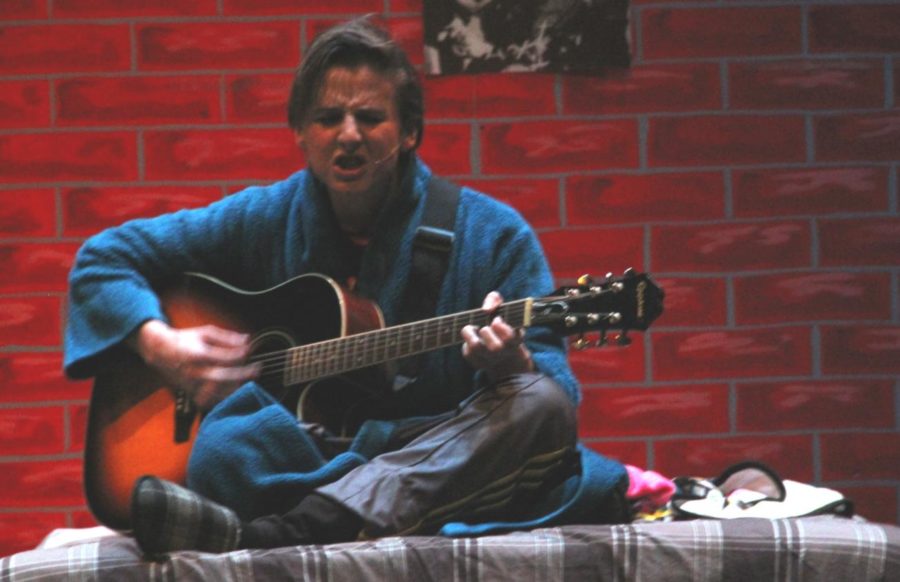 The protagonist of the musical, Robbie Hart (Colin Mastalir), sings his heart out after a rough breakup.

After months of hard work and preparation, “The Wedding Singer” has finally arrived at the Carlmont Performing Arts Center (PAC).

This is the fourth Carlmont musical directed by Stephanie Maysonave.

“This year I wanted to give the kids more contemporary material. Our last play, ‘Anything Goes,’ was fun but it was definitely a period piece from the ’30s. For this play, we wanted to go for something a little more modern,” Maysonave said.

“The Wedding Singer” is a musical adaptation of the 1998 romantic comedy starring Adam Sandler. It follows the trials and tribulations of Robbie Hart, an unlucky in love wedding singer.

Many students, like lead actor Colin Mastalir, have taken to the material.

“I think it turned out quite well, and I’m super excited,” Mastalir said.

Mastalir portrays the protagonist, Robbie, as a nice guy with a punk edge.

“He’s a soft character, but every once in a while, his old self will surface in comedic ways,” Mastalir said.

Students rehearsed for several hours a night, with some later sessions going as late as midnight.

Still, many students are more than willing to make this sacrifice.

“This is my favorite hobby, and I enjoy every second of it. It combines my favorite things into one product that I can put on for other people and that brings joy to other human beings. I think that’s truly special,” sophomore Katie Mannion said.

In addition to the performers, tech workers prepared for several weeks before the performance.

“As a stage manager, I had to attend two rehearsals per week for roughly two and a half months before rehearsal, and every rehearsal during the week leading up to the musical,” said Noa Carrera, a junior and the stage manager of “The Wedding Singer.” “Seeing the musical come together though, I can wholeheartedly say that it was worth it.”

Sometimes, members of the tech crew stayed even later than the performers. Still, many like sophomore Andres Raddavero stayed positive.

“If you know what you’re doing to contribute to the end result, and you watch the end result become successful, that, to me, is one of the most accomplished feelings in the world,” Raddavero said.

The musical was received warmly from audience members, with some even participating in the songs.

“I enjoyed it a lot. The dancing is really pretty; the costumes are cute; the New Jersey accents are cool. I’ve been to the last four Carlmont musicals, and each one has been a quality production,” Vivian Yip, a senior, said. “I’m really impressed by everybody involved.”

“The Wedding Singer” will run through Feb. 12 at the PAC. To buy tickets, visit https://app.arts-people.com/index.php?theatre=chs.

“As a classically trained actor, I used to think musicals were trite and frivolous, but directing them, I’ve discovered how much fun they are,” Maysonave said. “It’s tremendously joyful to dance and sing and to watch people dance and sing. There’s a reason our culture is centered around dancing and singing.”