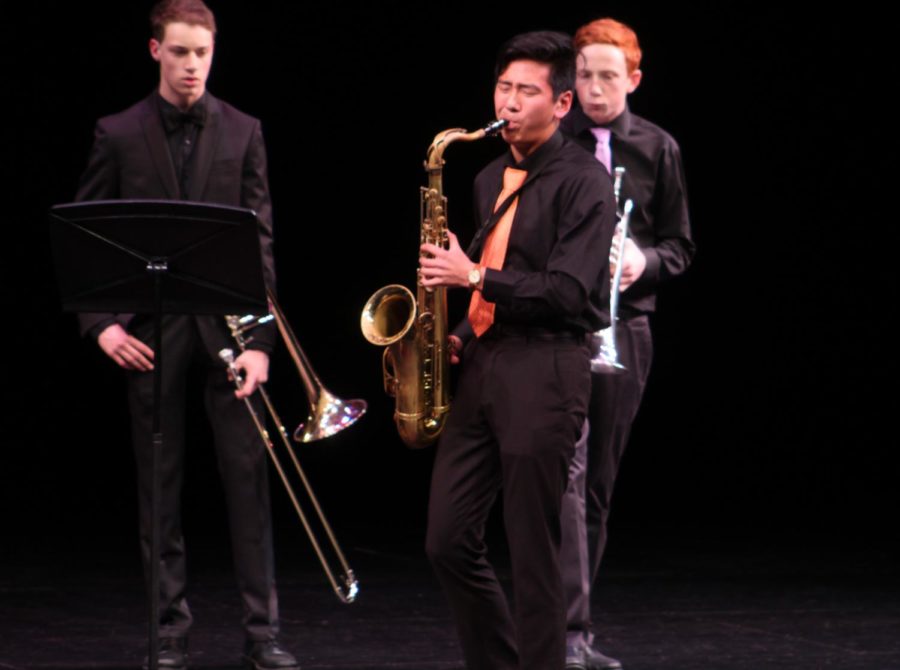 Instrumental Chamber Music Night is a Carlmont tradition in which small groups and soloists perform short selections of instrumental music.

“Anything goes,” Assistant Instrumental Musical Director Brian Switzer said. “We might have an amazing technical piano soloist, followed by a ukulele trio, followed by a jazz band.”

Most performances are student organized. Students practice during lunch or after school in preparation for the night. For some, like sophomore Adrian Fernandez, Chamber Music Night is an opportunity to express themselves.

“For me personally, orchestra is very limited, and it’s all about unification,” Fernandez said. “Chamber Music Night is an opportunity to kind of show off.”

Many students devoted a sizable portion of their time towards preparing for Chamber Music Night. For example, sophomore Lauren Wang spent three months composing a Disney medley duet for ukulele.

“It was frustrating at times,” Wang said. “But I felt extremely accomplished when it was done.”

Some students, like Jenna Williamson and Jason Liu, both seniors, participated in multiple performances.

“I’m going to be a music major next year, so for me, it’s really good practice to perform in front of people,” Williamson said. “I recently went through the audition process, and so much of that was playing in front of two or three people, and their opinions are the only ones that matter. For Chamber Music Night, all that matters is what you’re playing and what that means to you.”

The night was filled with many memorable performances, one of which being a rendition of Queen’s “Bohemian Rhapsody” by the eight-person Cello Ensemble.

“Chamber music night is really a pinnacle of the Carlmont instrumental music program,” Liu, a member of the octet, said.

“Every year, there are great performances, and this year is no exception,” sophomore Mackenzi Rauls said. “This is a really great way for students to display their individual talents.”

Students will display their talents as a group on May 16 and May 17 in the Instrumental Music Spring Concert.

“Music provides a quest that is never fully realized,” Switzer said. “Those who play are motivated to strive for something beautiful and rewarding.”