Changes come to the English department 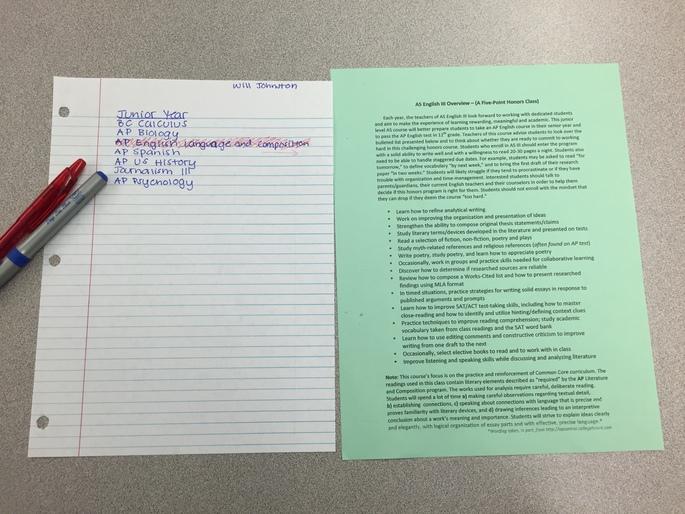 Students will have to rethink their decision to take AP English now that it is no longer being offered to juniors at Carlmont.

Big changes are coming to the English program for those entering their junior year.

In past years, juniors have always had the choice between regular English, AS English III, and AP English Language and Composition. This year, the decision has been made to remove AP English as a choice for juniors, leaving them the choice between regular college preparatory English and AS English for the 2016-2017 school year. That means that in their senior year, students will be able to chose between AP Composition and AP Literature if they chose to do so.

According to the course description of AS English III, the new course is designed to better prepare students for the AP class they would potentially take their senior year. It is still a five-point class, but with less rigor than an AP.

Changes in the English department are not the only ones coming in the 2016-2017 school year. Next year, AS Chemistry is being removed as an option for incoming sophomores, similarly to the change of the previous year when AS Physics was also cut from Carlmont curricula.

Junior Ilana Hamer, who is currently taking AP English this year, has felt the advantages of taking the class.

Hamer said, “I definitely think I’ve benefited from the class. It’s really different from any other English class but we’re learning a lot of interesting things and I feel like I’ve grown a lot as a writer.”

Although the changes have been agreed upon by all of administration and the English department, some students are still disgruntled by the decision.

Maddy Meier, a sophomore who was planning on taking AP English next year, is disappointed that the class will not be offered for her next year.

“I was planning on taking the class to get a head start for college and get a boost on my GPA. I actually like English as a subject, so I feel kind of mad that I won’t be able to take it as an AP next year,” said Meier.

For some students, this decision may feel like a let-down, but in reality, it is actually meant to help them.

“Most colleges don’t accept credits for two years of AP English anyway, and we don’t want students going into college expecting to get credits that won’t be accepted,” said Cho.

Next year, although there are less options, students still have the choice between college preparatory English and AS English, which are both beneficial options to prepare for the years ahead.