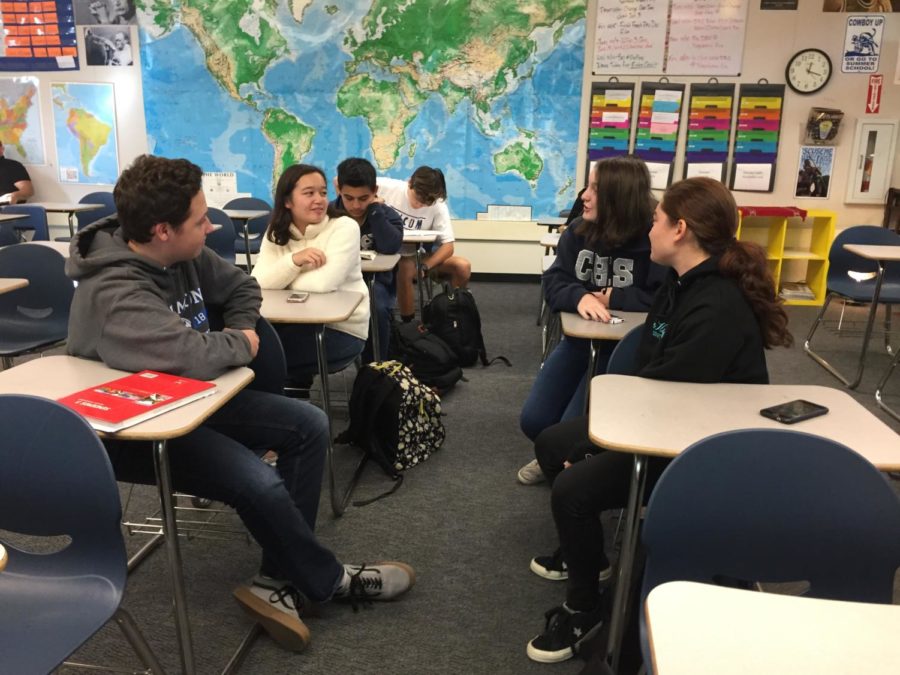 The members of the Changing Lives Club discuss their plans for their upcoming performance.

According to the Bureau of Labor Statistics, the volunteer rate for U.S. citizens was approximately 25 percent in 2015, thus the majority of people don’t spend their time helping others in need.

Changing Lives Club aspires to challenge this statistic, as they use the resources available to them and their time to help those who are less fortunate.

Changing Lives Club is in its first year of operation and was started by Varsha Raj, a sophomore. Through the creation of the club, Raj hopes to take action and change the community and others outside of it for the better.

The club members hope to organize fundraisers and aid previously established organizations to help kids who don’t have access to an education. Although they want to reach people across the world, they’re starting off small by performing music at the Sunrise of Belmont, a local senior living home.

“Often times around the world, children have to sacrifice their education in order to work for an earning for their family, so our goal is to work with organizations and make their lives better by giving them a good education,” said Sarga Nair, a sophomore and vice president of the Changing Lives Club.

Approximately 60 million primary school-aged children around the world don’t have access to an education. Developing countries often lack the financial resources to support and establish schools. In addition, girls make up the majority of children without an education due to their role in the family.

“The main point is to empower them to make their own life decisions, and be able to work in a good job when they grow up to make their lives better,” Nair said.

Lack of time along with other reasons prevent people from volunteering, but Changing Lives Club strives to change that by giving people somewhere to start and the motivation to help others.

“Taking a chunk of that time and, you know, volunteering, I think that’s inspirational. It kinda makes me want to jump in and give my time, at least at a kitchen,” said Jaime Garcia, a history teacher, and advisor to the club.

Most clubs at Carlmont benefit or enrich their members in one way or another, but Changing Lives Club is different because it focuses on helping others outside of our school community.

“Teenagers, in general, don’t stop to see what they can give,” Garcia said. “It’s great that they’re doing something so noble.”