Changing running surface can cause pain 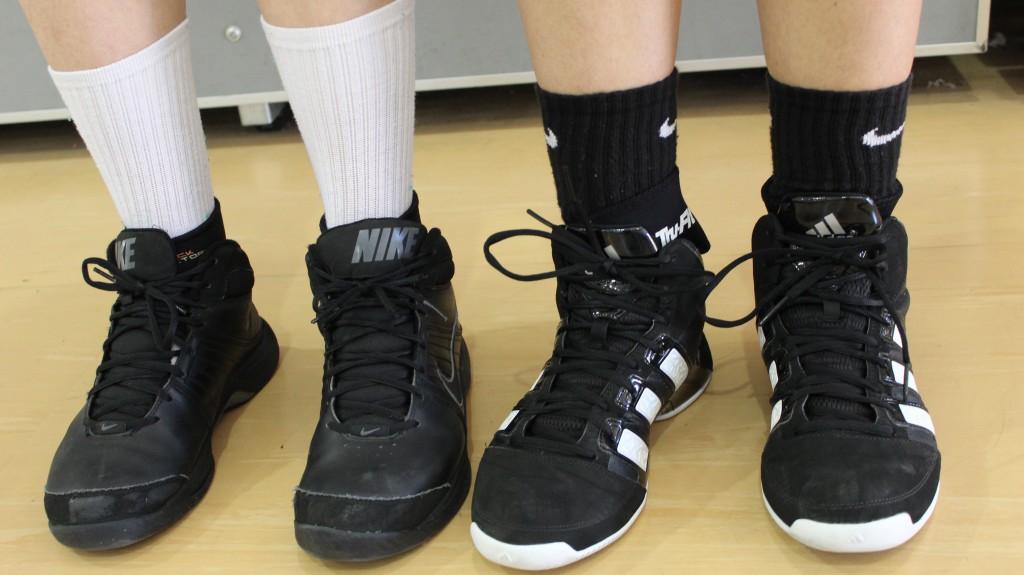 Caslow's basketball players wear compression sleeves on their ankles to prevent running injuries before they occur.

Shin splints are one of the most common injuries for runners and other athletes. This separation of the muscle from the shin bone leads to inflammation, resulting in a sharp pain with each step.

Head Coach of the Girls Frosh-Soph Basketball team Eric Caslow said, “Shin splints come from two main sources: a dramatic increase in activity or changing the surface you’re running on.” This change of surface can affect those who participate in both track and cross country. When they switch from track to trail (or vice versa), they are at risk of injuring themselves. During periods of athletic inactivity, a scar tissue forms between one’s muscle and shin bone. A sudden increase in exercise can destroy the scar tissue. To prevent this sudden tearing of the tissue, Caslow’s basketball team does exercises such as a “heel walk” and “toe stretch” to loosen up the muscle prior to an intense workout. Caslow said, “Once you get shin splints, all you can really do is reduce the activity. In three to seven days [the player] should start feeling significantly [better] and be able to return to full [participation in practice].” The best option for athletes with shin splints is very light activity, somewhere around one quarter of their normal workout. Most people with shin splints who stop exercising entirely will find that the injury returns within one or two weeks when they begin exercising again, unless they are participating in a no-impact exercise such as swimming. JV Girls Soccer player Alexa Zaino said, “I had shin splints for about two months. I stopped running as much and had to miss some soccer practices because of pain and to give the shin splints time to heal.” Zaino was already running daily because of cross country. “I was also wearing old cleats [for soccer] and running shoes for cross country,” she said. These old, ill-fitting shoes contributed to Zaino’s shin splints. Sophomore Cameron Kuo said, “Running flat-footed without arch support or running on hard surfaces may cause shin splints.” Zaino’s shin splints “went away on their own” after she cut back on her sports. When diagnosed with shin splints, it is important to participate in light exercise and gradually increase activity. Traditional treatment methods include icing the shin to reduce swelling and taking anti-inflammatory drugs such as Ibuprofen. These combine with specific exercises and stretches to create the most efficient track for recovery. Orthotic shoe inserts can also be used to add more arch support if necessary. To prevent this injury and stay in the game, wear shoes with arch support and avoid running on hard surfaces.