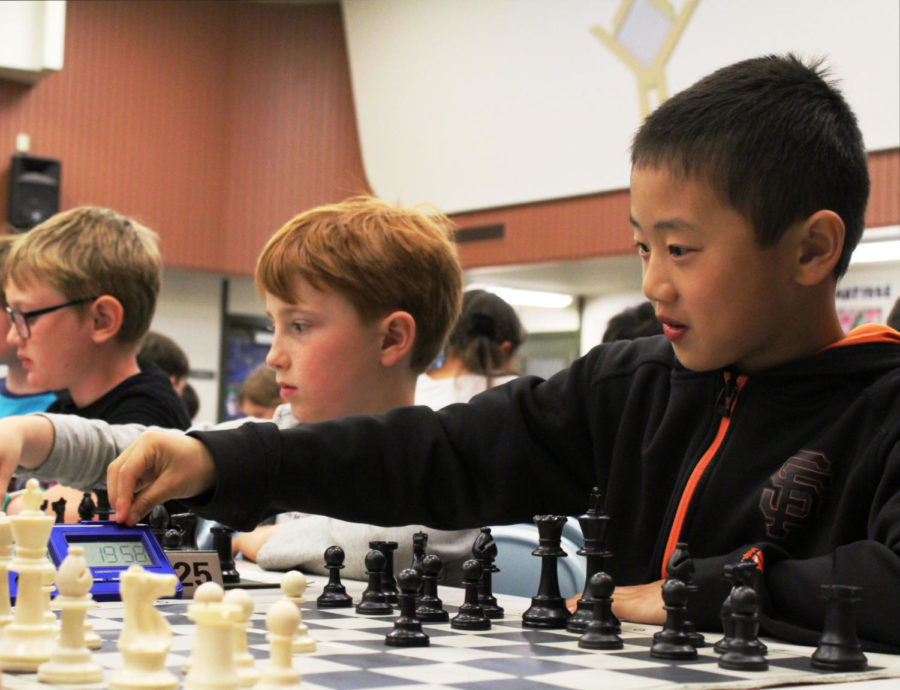 A boy reaches to hit the timer, signaling the end of his move against his opponent.

The chess tournaments serve as fundraisers for the Fox School PTA, as all staff members are volunteers. The club began with about 80 kids, but as chess gradually gained popularity, the organization has peaked at about 160 kids.

“Chess right now is very popular; scholastic chess in particular. A lot of parents see chess as a part of their child’s education, instead of just sports, or music, or art. Chess seems to be that perfect fit in between,” said Dennis Meyers, the tournament director.

Tournaments occur annually around March, designed for kids in kindergarten through eighth grade. Occasionally, preschoolers participate as well. The bulk of the kids are primarily in second, third, and fourth grade.

“Normally, locals would have to go to events outside of the community here. This tournament is in the mid-peninsula and that gives kids an opportunity to play,” Meyers said.

Advantage Chess has appeared at the Belmont Library.

“I call it community chess because parents are allowed to stay in here. In competitive chess, parents are not allowed in the rooms in order to minimize distraction,” Meyers said. “It introduces a lot of kids to chess, and there are many beginners.”

Many students with previous experience often enjoy being involved with the program, as it provides them with the chance to connect with others developing a similar passion.

“I really enjoy chess because I have a background with it for about 10 years. I think it was a great idea to help out at this tournament, especially since I love the game and I want to share my feelings about this game with other people,” said Jarett Nishikawa, Carlmont student.

Additionally, a variety of adults and parents find the game of chess beneficial for the youth.

“It’s always good to help children because chess is one of the greatest games played,” said volunteer Olga Culsinsolva. “I can see the children are really disciplined and really calm while focusing and I think it really benefits them. I am glad to be a part of that.”

Advantage Chess hones in on the balance between school academics and chess skills, as both activities require following directions, cooperating with peers, and practicing good sportsmanship.

“My kids wanted to join the club themselves,” said Alice Wang, who has a 10-year-old boy and an eight-year old boy. “Chess teaches them to be focused and use strategic thinking. This is our first tournament and I think it is pretty organized and they do a good job of explaining what to expect. It runs very smoothly.”

Chess continues to inspire many students today, as the classic brain game appears to provide a challenge for their minds.

“I love it. I like how serious the kids are,” said Richard Sim, a father of an eight-year-old boy. “Every once in a while, you see a kid crying, and I think it’s okay to learn how to lose. It’s good to try really hard and figure out how to better next time. They learn a lot about planning ahead, and you can see the improvement.”