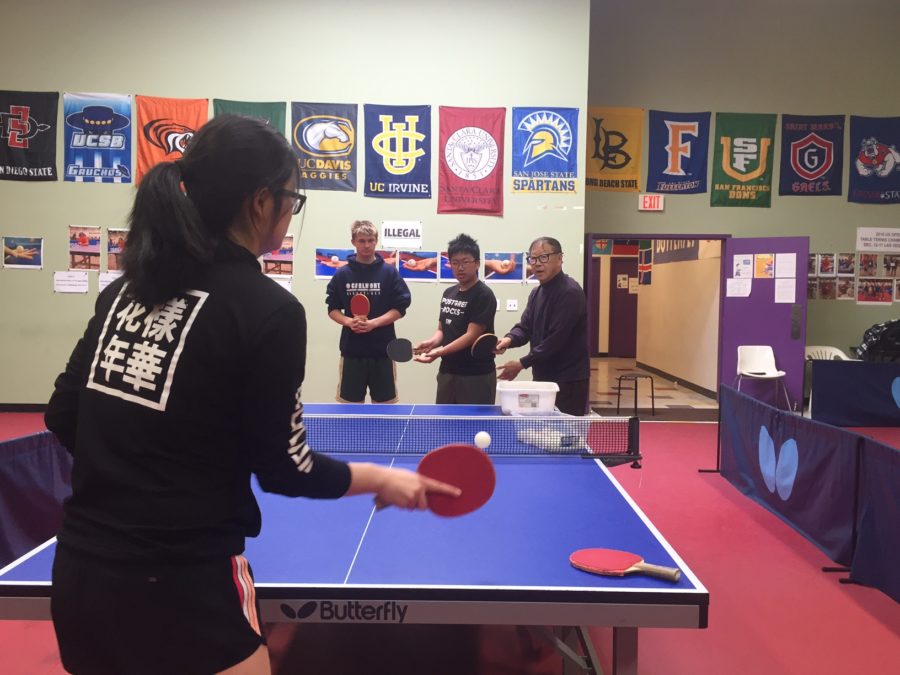 Julia Tu serves the ball as Albert Li waits anxiously on the other side of the table to return it.

On Friday, March 31, Chinese Culture Club (CCC) went on a field trip to PongPlanet in San Carlos to learn the history of ping pong and how to play the game.

Instructor Lau, a ping pong enthusiast, taught students the basics of ping pong. He also introduced many different types of grips that could be used to hold the ping pong paddle and explained how those grips were favored by certain countries.

Ping pong, also known as table tennis, originated as an English parlor game in Victorian Britain and was enjoyed by the wealthy. However, in the early 1900s, it became popular. Its influence can be compared to football in America but even more so in China.

In China, it isn’t always easy to find a spacious enough area much less an open field to play a soccer, football, or baseball game.  On the contrary, ping pong only calls for a table, a net that can be easily improvised, some paddles or thick pieces of cardboard and some light ping pong balls: all of which are easily accessible.

“The best part of this event was realizing how something as simple as a table, two paddles, and a ball can have such influence internationally and bring people of such diverse cultures together,” said Albert Li, a freshman officer in CCC.

Due to its popularity in China, ping-pong has become part of Chinese culture and as a result, Chinese Culture Club chose to introduce this sport to its members.

“It is also a great way for members to bond while also being introduced to a sport that is incredibly popular in China,” said Julia Tu, vice president of CCC.

This event was successful, as CCC was able to gain new members, and it helped members bond over the new sport.

“I would want to attend an event similar to this one because I would have a chance to improve on my ping pong skills and learn more about ping pong and its interesting history,” said William Jessen, a freshman who recently joined the club.

Over the past few years, CCC has seen a change in membership as officers and members have graduated. CCC hopes to expand its membership of the club by organizing more events that are open to the student body.

“I wanted to create a more engaging environment for CCC and host an activity that wasn’t in a classroom setting,” said Tu.

CCC meets every other Friday at lunch in room U14 to celebrate Chinese culture by discussing Chinese heritage and food.