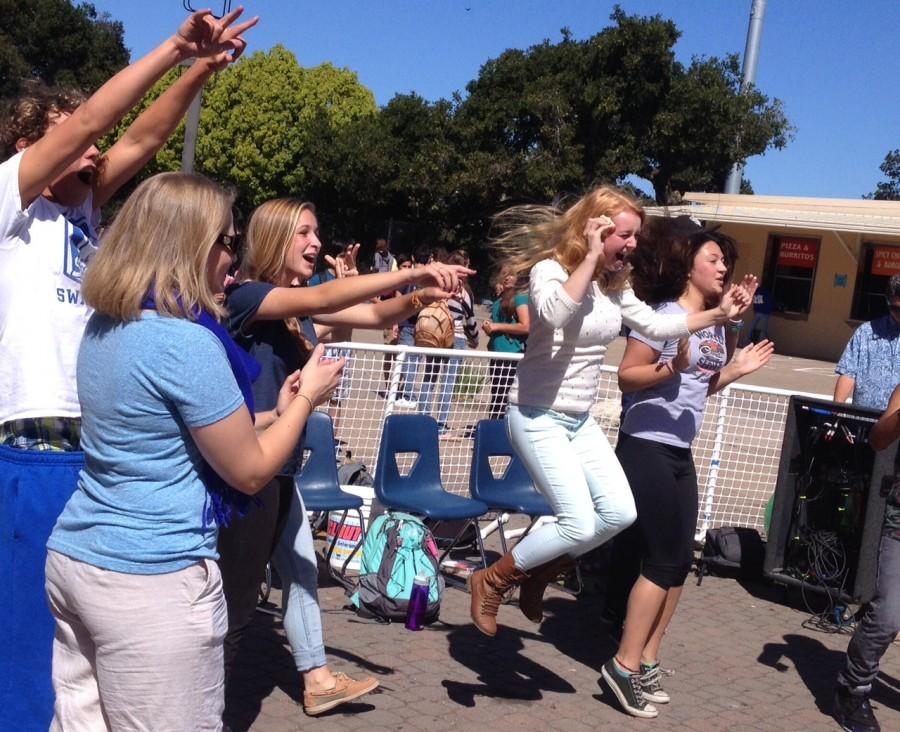 Carlmont Cup is a fun school tradition that lets students on different Carlmont teams and in clubs interact with each other.

As students gathered for lunch, announcers Tristan Gasperian and Ethan Wallace pumped up the crowd.

The competition started with sky bowling, which Kurt Hildebrandt won for choir. Next was hippity-hop where the Robotics club was victorious, bringing the score to a tie at one all.

Robotics pulled out another win in bucket ball. Robotics club member Skyler Stratton said his strategy for the third event was to “hit the side of [the bucket].”

Choir should have taken note because that loss left them down one point at a crucial time in the competition. Robotics only needed one more win to take the game.

However, choir was able to come back in the fourth round, with Pyper Hayden acting as their “nervous nelly.”

Hayden commented on her mentality during the challenge: “I was pretty certain I was going to pass out, but it was worth it to win for my team.” After Hayden’s win the score was again a tie at two all.

Choir fought extra hard in the deciding round and came out on top with a three-two victory. They all knew the final round was their last shot at maintaining their title of Carlmont Cup champions.

Raine Kerhin, member of ASB and coordinator of Carlmont Cup, said “I am proud of choir today…they really wanted to win.”

Kerhin attributes their win to choir’s “good spirits” saying “they were very supportive and passionate about their team.”

ASB member Spencer Stewart said the Choir-Robotics match up was “very intense, going all the way to the last game of the last event.”

Stewart predicts this year’s Carlmont Cup is “on pace to be the best Carlmont Cup we’ve ever had,” and that “the games are only going to get better from here.”

To see Choir defend their trophy next, come to the quad on Oct. 14 where they will be battling the winner of the boys soccer versus girls soccer match-up.