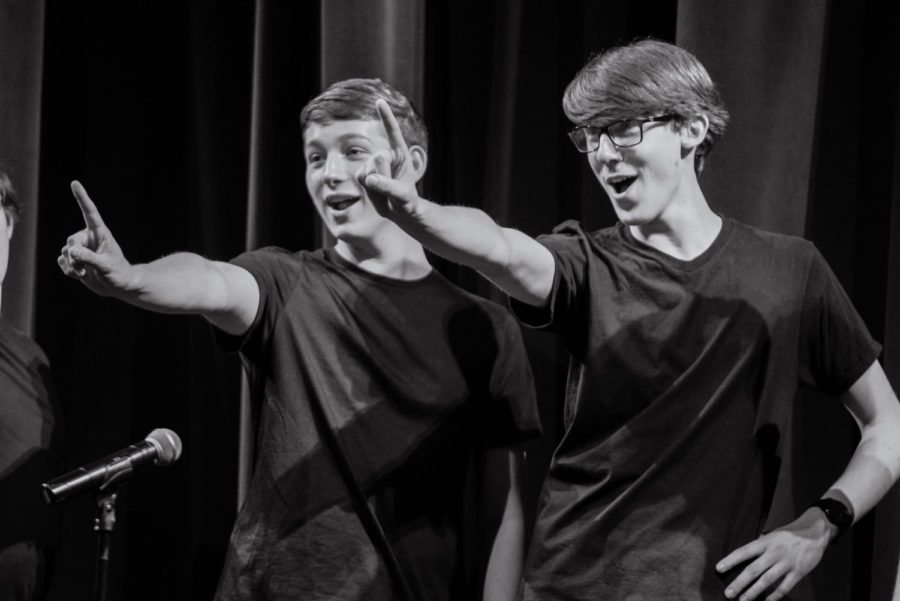 Colin Welter and Will Nadan sing a rendition of the song, "Girls Just Want to Have Fun," with their a cappella group, Fine Tuning.

On May 22 and May 23, the Carlmont Performing Arts Center hosted the annual Choir Pops Benefit Concert.

This concert not only allows Carlmont’s choir students to show their growth from the start of the year to the end but also serves as a major fundraiser for the choir program.

“Pretty much all of the proceeds from this concert go directly into the choir program,” said Colin Welter, a junior and the treasurer of choir council.

Though Carlmont’s choirs perform in multiple concerts throughout the school year, the Pops Concert consists of various pop songs that are centered around a certain theme.

“This year, the theme is ‘Breaking Barriers’ so most of the songs are written or arranged by women, people of color, or LGBT artists,” said Aliyah Wachob, a senior.

This includes songs from artists who also broke barriers such as Cyndi Lauper, Elton John, and Stevie Wonder.

It was important for the choirs to showcase their support for diversity and acceptance of all to contrast typical choir music.

“A lot of the modern choral repertoire features mainly white, straight men, and so this concert is a space where people from every identity group can be represented,” Wachob said.

Wachob has been a part of the choir program for three years. She joined as a sophomore after hearing about how much fun it was from friends. For Wachob, choir continues to be the focal point of her musical passion.

“Choir is one of the most amazing programs on campus because there really is a place for everyone,” Wachob said. “Even if you’ve never sung before, choir can still be so much fun because of choir tours, potlucks, and concerts.”

This open-armed atmosphere is one contributing factor to the diversity within the choir programs. It also serves as an explanation as to why many choir students are supportive of such diversity.

“Ms. Tep is amazing,” said Mika Hiraishi, a freshman. “Everyone in choir is really different, but we all share a love of music. Even though we might be really different outside of choir, in choir, we are all kind of the same.”

As the last concert of the year, the Choir Pops Benefit Concert is often a time filled with emotion as seniors perform for the last time.

“It’s really just one last hurrah for all of us to be together as one big family,” Welter said.