Choir Pops Concert is out of this world 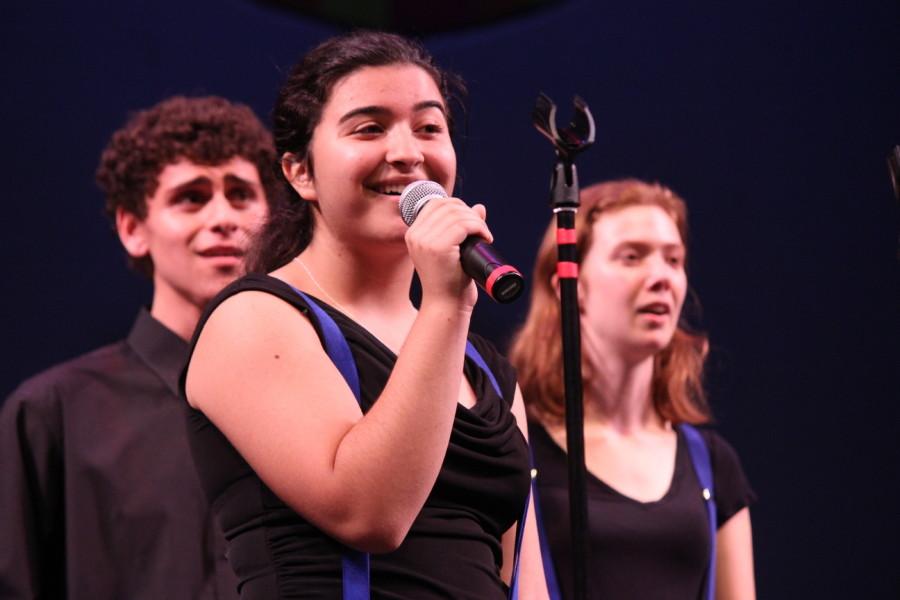 Sophomore Marjan Moshiri performs a solo in the song "Moondance" by Van Morisson at the 2015 pops concert.

The Carlmont Choirs performed their 2015 Pops Benefit Concert “Scots in Space” this weekend.

This year’s theme was chosen from a list of student submitted ideas and was incorporated throughout the whole production.

“Every song relates to space,” said senior Sierra Segal, Carlmont choir president. “Whether it includes the word star or sun, or we have a song by Bruno Mars since his last name is a planet and even a song from the movie Wall-E.”

According to one choir student, this year’s Pops Concert put the past ones to shame.

“I have been to all the Pops Concerts since I was in middle school, and I have watched so many videos of past years, and I believe that this year’s concert is the best in at least a decade,” said Segal.

The lighting and sound work contributed to the enjoyment of the concert.

“I think that Pops is the best concert all year because of all the cool effects we get to use like the black light and disco ball.” said junior Maleia Gutierrez.

The Pops Concert always has pricey tickets, but as Segal said, “This concert is our benefit concert, which provides scholarships for kids to go on choir field trips.”

The nearly-full audience fell silent as the curtains opened but let out loud applause after every song.

“My favorite song they performed was ‘Drops of Jupiter.’ It’s one of my favorite songs and I loved the energy,” said audience member and sophomore Sehar Masud.

During transitions between groups, Genevieve Tep, the choir and performing arts department chair, made announcements regarding special thanks to those who made the concert possible.

Though personal photography was not allowed at this event, Robyn Peters, a professional photographer and choir mom photographed the event as well as the rehearsals, and those photos will be available to parents through her website.

This performance is different than the other performing arts events because it incorporates “music that is more relatable to our age group,” said junior Megan Wadleigh.”It’s a different choral experience that we all find really fun.”

The Pops Concert sets the precedent for choir in the near future.

“Pops gets everyone riled up to see what’s to come for the rest of the year,” said junior Lillian Gowen.