Choir rocks Save the Music 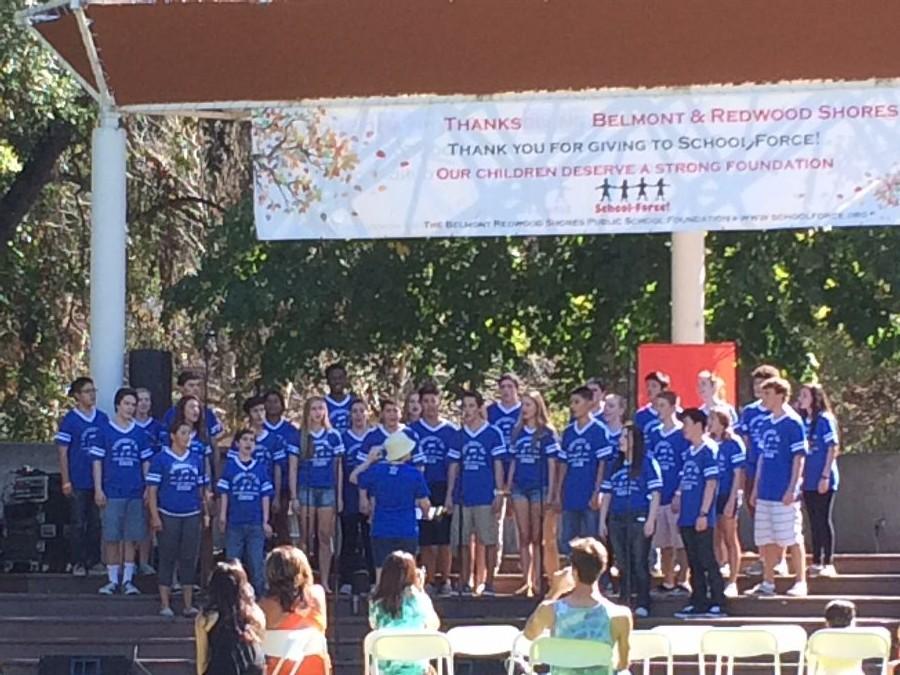 Carlmont choir performs at Save the Music.

The annual Save the Music festival was held at Twin Pines Park in Belmont, Calif. on Sunday Oct. 5. Save the Music is put on by School-Force in order to raise money and support music programs in Belmont-Redwood Shores schools.

Many of Carlmont’s own students perform at Save the Music every year. From dance to band to choir, students involved in the performing arts program go out and demonstrate their talents and love for the arts.

This year Carlmont’s Chamber Singers, Concert Choir, and their “Out of the Blue” a Cappella group sang a variety of songs that they have been practicing this school year.

“This was choir’s first performance as a group so it was a little rough at times but we had fun singing anyway and seeing the audience enjoy it too,” said senior Tara Callan, who is part of both Chamber Singers and Carlmont’s dance program.

Save the Music provides musical entertainment, food, and activities for people of all ages to participate in. The festival draws in plenty of people for its entertainment and for its purpose.

“I have performed in Save the Music a few times with choir, but I didn’t this year. Even if I don’t perform I always go and watch because it is a fun way to spend the day with friends, and it’s especially fun to watch when you have friends performing,” said senior Isabel Zwass.

Almost every year Carlmont Choir has a few of its groups perform, and then all of the choirs perform together as the Singing Scots.

Another tradition choir has maintained is performing a piece or two with Ralston Middle School’s choir. This year they sang a version of a song called “Best Song Ever,” which was originally performed by the band Wallpaper.

“Being a part of choir at Ralston and then at Carlmont has been really fun. I was always excited to perform with Carlmont when I was in middle school, and now it’s even more fun being one of the high school kids that gets to carry the group,” said Snehal Pandey.

Save the Music is a way for families and friends to get out in the sun and enjoy music and activities together, and to do it all for the purpose of raising money to keep these music programs in local schools.

Callan said, “I like performing at Save the Music because it’s a really fun atmosphere and it feels good to be a part of it.”

This year’s 12th annual Save the Music festival provided the music, entertainment, and fun atmosphere that is always does.