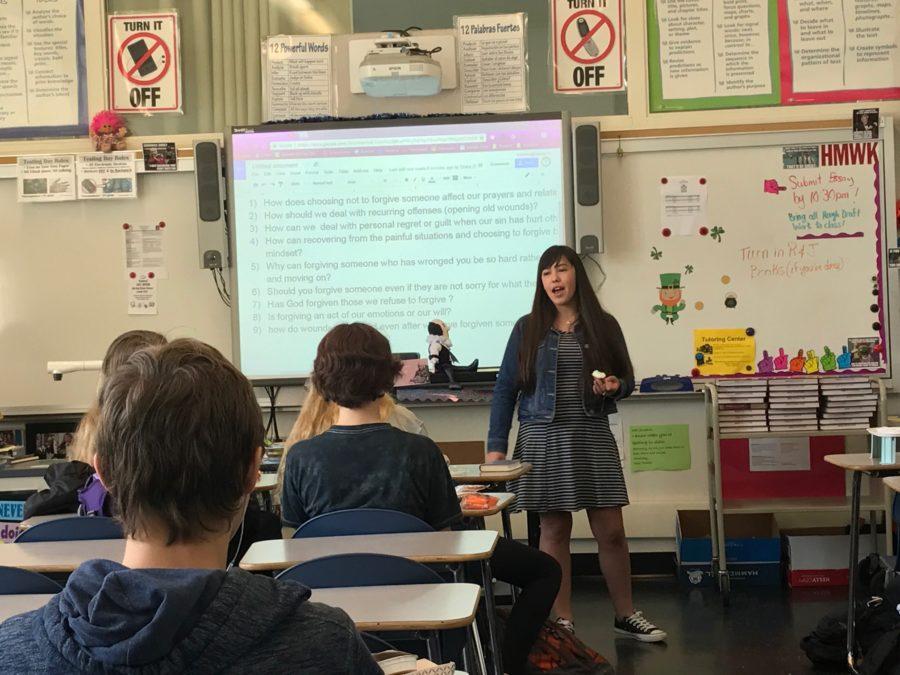 The Christian Club spent their last meeting talking about a topic that many people have trouble with.

“Forgiveness is a strange concept in that your debts are cleared simply by someone saying you’re forgiven, yet it is so freeing to know that you are no longer held accountable for the hurt you might have caused people,” said Kalea Pasion, a junior and copresident.

During the most recent meeting of the Christian Club, the club members divided into groups to discuss forgiveness. They covered why forgiveness is important to both their faith and themselves and how forgiveness can significantly impact their life.

Freshman Westley Costa said, “We discussed that forgiveness is more unconditional than ethical, and how forgiveness is letting go of something that someone might not even be sorry about, so you can move on with your life.”

Costa was raised to believe that it’s important for a person to take the high road in order to resolve an issue and move forward their life. This can be done by forgiving the person that has done something wrong.

A large part of Costa’s views on forgiveness stemmed from Christianity.

Sophomore Kristin Chen said, “As Christians, we are called to forgive others no matter what they have done because God has forgiven us for all of our sins no matter how bad they seem.”

Forgiveness seems to be difficult for many people, but the members of the Christian Club do so despite the challenges. Chen sees forgiveness as something that is inevitable in every situation whether the conflict may be large or small.

For some members of the Christian Club, forgiveness has a clear correlation with faith.

Pasion said, “I definitely believe that forgiveness is based on faith. I feel Christianity gives you a reason to forgive people and reflects how God sent Jesus to die for us to be forgiven.”

For many Christians, forgiveness is part of one the most significant events in history and integral to leading better lives. The members of the Christian Club have used their knowledge to teach others about the topic of forgiveness.

“Forgiveness is vital to happiness. Letting go despite how unethical or difficult it may seem is much better than living your life in constant hatred and anger,” said Costa.

Costa’s message to others might help people to move past the conflict in their life. Pasion, on the other hand, has a different message.

Pasion said, “Forgiveness is healing and shows a person’s growth in character. Forgiveness not only helps you, the one forgiving others but also can have a huge impact on your life and the other person’s life too.”