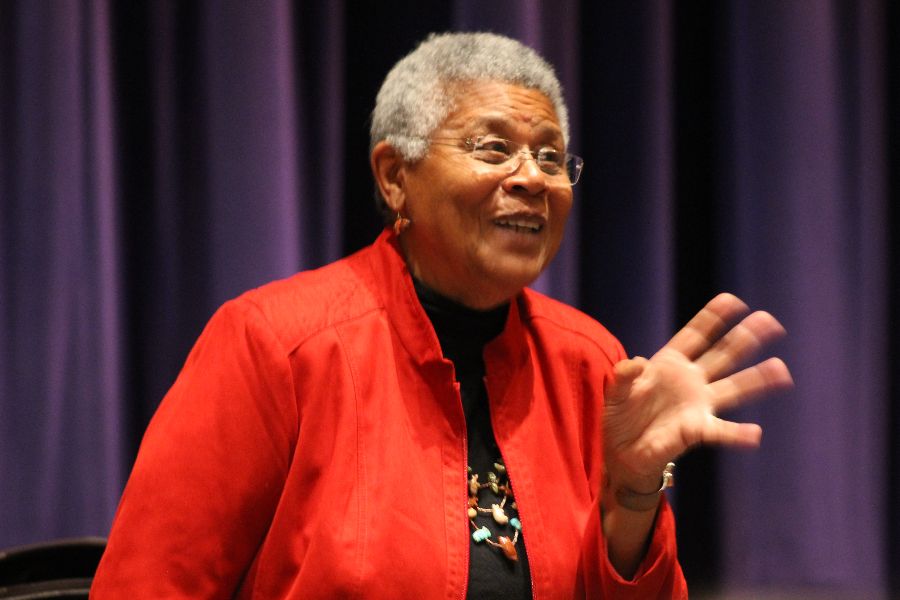 She walked with her head held high up the broad steps of her school, surrounded by one thousand troops from the U.S. Army for protection, amidst screams of racist remarks and violent threats. It was her first exposure to racism, and she could feel the hatred pouring in from every direction.

Minniejean Brown Trickey was only fifteen years old when she became a member of the Little Rock Nine, a group of African American students who were the first to attend an all-white high school in Little Rock, Arkansas.

Trickey, now 72, visited Carlmont High School on Wednesday to share her story of surviving segregation during the Jim Crow period, when the battle for civil rights for African Americans was at its highest point in history. Trickey endured racist remarks and threats throughout her high school years, as she took part in a battle for the outlaw of segregation.

“There couldn’t have been any hope,” said Trickey, as she spoke to a group of Carlmont students at a meet-and-greet. “When things are like that you can’t dare hope for better.”

In 1957, Trickey and eight other peers volunteered to be the first black students to ever attend Central High School, an all-white school in Little Rock, Arkansas. Trickey seized the opportunity to participate in the battle for equality, and the school was close to her home with new technology and learning opportunities. Before arriving at the school, Trickey had been prepared to make new friends with the students at Central High. However, she had never anticipated the extent to which they would be unwilling to accept her, and the hatred she would feel on the first day.

“I thought, all we have to do is get to know each other, and this will work,” said Trickey. “But I had no idea what was coming.”

Before she had even arrived at school the streets around Central High School filled with a mob of white protesters, who shouted racist remarks at the Trickey and her peers, and threatened violence. Troops were even sent by Arkansas’s segregationist governor, Orval Faubus, and they used rifles and weapons to block the students’ passage to school. Each day, the mob grew larger and more menacing.

The Little Rock Nine soon received help from President Dwight Eisenhower himself, and on Sept. 25, he sent one thousand troops from the U.S. Army to protect the students as they entered the school. It was the first step toward success.

However, threats continued as the nine students attended classes at Central High. Angry protesters would drive by their apartments in segregated neighborhoods or deliver menacing phone calls, and white students continued to bully the Nine at school.

“[The bullies] were told enough that they were willing to terrorize us,” said Trickey. “And they began to believe what they were told.”

Trickey changed her fate one day in the cafeteria, when a group of boys attempted to block her path. She spilled chili on one of the boys, “accidentally on purpose,” and was immediately suspended from school.

“I was covered in grease, but I held my head high and swept out of the room,” said Trickey, raising her arms for emphasis. “I thought to myself, ‘Minnijean, think of them as your subjects and you are royalty.’ I walked right out of that room the way they didn’t expect me to.”

Trickey continued to fight against the segregation system, and a series of events eventually led to expulsion from Central High. Trickey struggled with frustration for years, feeling she had disappointed her family. But Trickey’s mother expressed enormous pride for her daughter, whom she felt had defied the stereotype given to blacks at the time.

After her expulsion, Trickey left Little Rock to study at a private school, and later majored in journalism at Southern Illinois University. Years later, the Little Rock Nine reunited in 2007. Trickey even reunited with the boy she had spilled chili on, Dent Gitchel, at a local chili cook-off a few years earlier.

Trickey’s story has touched the hearts of many around the nation, including the students and staff at Carlmont. During the meet-and-greet on Wednesday in Carlmont’s Performing Arts Center, Trickey answered questions from a crowd of Carlmont students, who felt inspired by her authentic tale of freedom.

“Usually you just read about history,” said Carlmont junior Loran Branch. “But it was really cool to meet someone who was actually there.”

Carlmont staff also attended the presentation, and many felt equally moved by Trickey’s story and her role in history.

“Minnijean always strikes me with her wisdom,” said Carlmont U.S. History teacher David Gomez. “She is important because she’s lived the history that we study. Especially today, because I hear people say the n-word, and it hurts my soul because I know what happened to Minnijean and others.”

Trickey urges modern-day youth to learn from her story, and strive to improve upon themselves. She believes that students can help foster equality by accepting of all of their peers, regardless of their racial backgrounds, and reaching out to those who are bullied.

“You lose hope when people stay silent,” said Trickey. “And you cause others to lose hope too.”