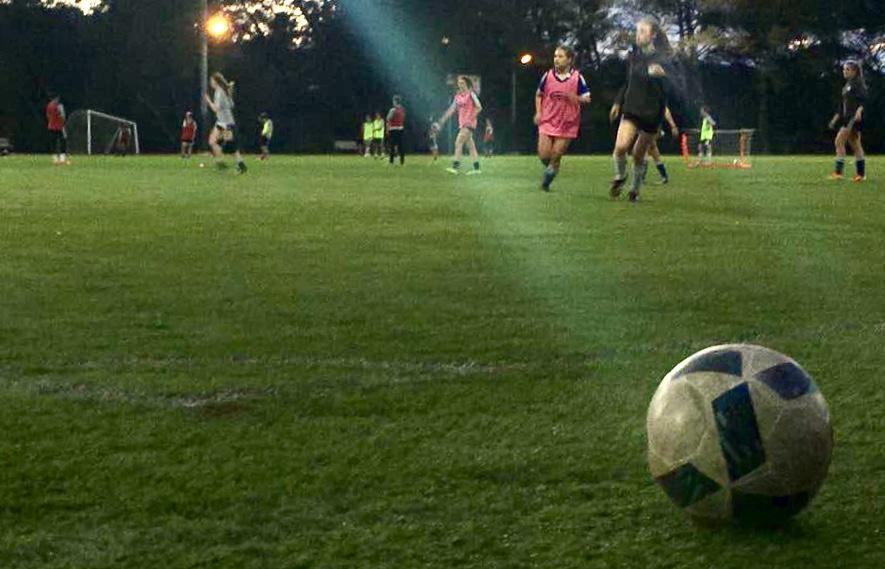 Players from Blitz, a San Carlos United team, participate in a scrimmage at practice.

“The grind” really does not stop for student-athletes. As the high school soccer season draws to a close, athletes are pushed back onto the field to play for their club teams.

“It feels really nice going back to club,” varsity goalkeeper and sophomore Varun Suklikar said. “I get to see all my teammates and since we’re really close, it’s always super fun to get to play with them.”

Carlmont plays in the Central Coast Section league (CCS) which has rules that prohibit players from playing on any club team during the high school season. As a result, many players have not played together in over four months.

“I’m really excited to be with my team again. I love the guys that I get to play with,” Suklikar said.

While some are happy to rejoin their team, others did not want the high school season to end. Supriya Haldankar, sophomore JV captain, was sad to leave her Carlmont teammates and return to club.

“I’m happy about going back to Blitz [club team] but If I had a choice, I would play high school year round,” Haldankar said. “We [high school team] spent over 10 hours together each week so we just became so close. That doesn’t happen in club.”

The transition from high school back to club can be difficult. It can be challenging to switch into different playing styles after playing a certain way for a consecutive amount of time.

“It is difficult to go back and forth between different coaches because they all have such different styles of play,” an anonymous girls’ varsity player said.

“I describe the difference between club soccer and high school [soccer] like a professional team and an international team,” Dye said. “You may play for Real Madrid but [play for] Wales as your national team. The expectations are different.”

Among players, the beginning of the San Carlos United season seems to hit a bittersweet note.

“Club soccer has a little higher quality of play, but nothing can match the hype that the team feels going into high school games,” Suklikar said.

However, as club season begins, Dye stresses the importance and challenge of getting back into a serious mindset.

“High school creates an environment based on camaraderie and getting the group back to a developmental picture is hard,” said Dye.