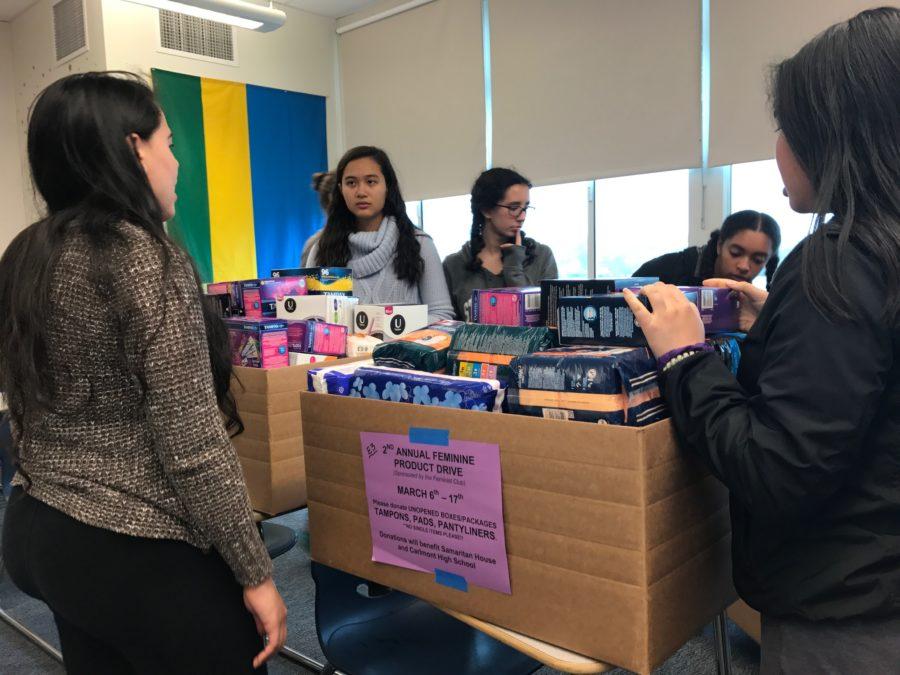 Feminist Club presidents, Sydney Pon and Evelyn Lawrence, meet at lunch on Friday March 24 at lunch to work on the Feminine Product Drive, along with a few other members.

With over 100 clubs at Carlmont, it can be easy to overlook the hard work it takes to not only create but also to maintain a successful club.

Even with a student body of around 2,000 students, it can still be very difficult to gain student participation due to the extensive work it takes for clubs to publicize and attract new members. Many people may be interested in a club but may have more important priorities such as homework, other clubs they are already active in, test makeups, any other conflicting responsibilities, or simply a need to take a break from the stress of school and socialize with friends.

Before a club gets to the point of having any potential difficulties, it must first establish or renew itself, at the beginning of each school year.

Activities Director and ASB advisor Jim Kelly, who also helps with the approval process for clubs, said, “It takes the same components to be successful with a club as it does for anything. It takes passion and belief in your product. It can’t be simply because you want to put it on your college resume. And that’s because it takes time and energy to run a club.”

Kozy Kids Club is a brand new club this year that meets at lunch on Fridays to make blankets for kids at Lucile Packard Children’s Hospital. As a newly established club, president Talia Fine and vice president Brandon Gee, both sophomores, have realized that maintaining a club takes a lot of time and hard work.

Gee said, “The hardest parts of running a club are only having a single lunch period to work in, not necessarily having constant leadership because we are the ones in charge of funding and because we are a non-profit and therefore we have to ask for money, as well as driving the blankets to the hospital.”

Recently Vegetarian Club has stopped meeting due to facing challenges in membership.

Sophomore and president Ariel Mandegarian said, “For me, a big challenge was organizing ways to try and pull in new members. Sometimes members seem to not want to dedicate a day of their lunch time or lose interest in the topics and the timing of when the club meets. The hardest part was trying to spread awareness for our club and what we aspire to do. Our mission was to educate people, rather than forcing anyone to be or eat a certain way.”

Even clubs that are well-established and recognized in the Carlmont community can face difficulties with maintaining their presence.

Feminist Club, which recently put on the Feminine Product Drive, has also decreased to two meetings a month instead of once a week after noticing a decrease in the number of people coming to their meetings.

Senior Sydney Pon, one of the co-presidents, said, “We have over 240 members on our Facebook group, over 300 followers on Instagram, and yet in the past few meetings only a handful of people have come. Many people at Carlmont show interest in feminism and want to learn more or get involved — so why not join our club?”

Even with all of the challenges that clubs face, the rewards of leading and participating in clubs motivates driven and genuinely dedicated students to persevere.