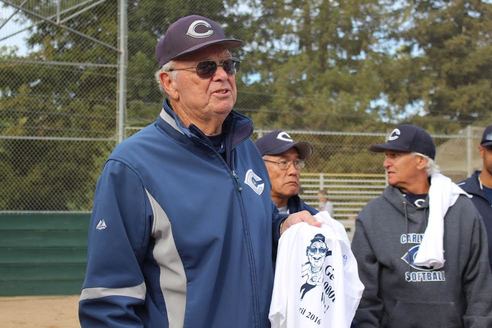 After his 1000th win, Liggett speaks to the team and fans.

“Really, 1000 of anything is noteworthy, and 1000 wins is a milestone,” said sophomore Josh Fong.

Fans, alumni, and former players all packed the stands and tried to get a view of the field to see if Liggett would reach 1000 wins with the result this game.

“It’s unbelievable how many people came out to watch this game. It really shows what we’ve done all the relationships that have been created. It’s more about the people than 1000 wins,” said Liggett.

The game started well with Carlmont taking a 2-0 lead from some strong hitting in the first inning. Carlmont’s strong pitching from sophomore Abygail Lan kept Capuchino off the base paths. Strong defense from Capuchino stopped Carlmont from scoring as it remained 2-0 through the second inning.

The Scots added another run in the third inning with the help of smart base running.

Capuchino stranded two base runners in the top of the fourth inning, but their defense kept Carlmont from increasing their lead. Despite a lead-off double from the Scots in the fifth inning, the score stayed 3-0.

With momentum on their side and the fans cheering loudly, Carlmont quickly moved through the sixth and seventh innings to capture their 15th win of the season and clinch playoffs.

After the final out, the teams and fans walked onto the field to celebrate and congratulate Liggett on his achievement.

Liggett said, “I hope the team didn’t feel too much pressure. This wasn’t something I was focusing on. The girls wanted to reach this and they’re a strong team. We’ve been playing very well this season.”

Varsity’s next game is set to play away against Mills High School on April 14.