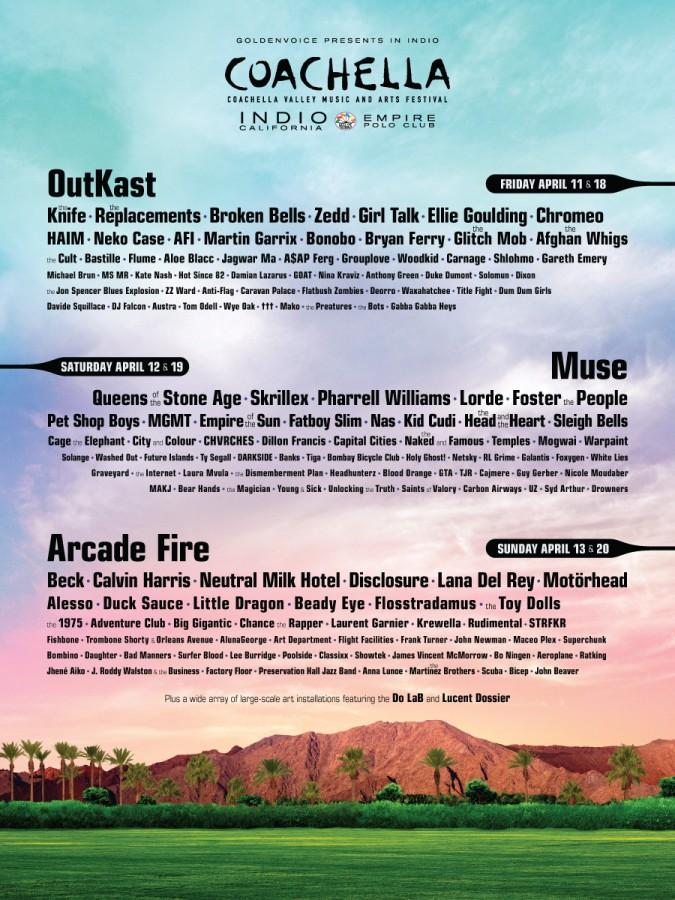 Each year since 1999, Coachella has brought some of the most well known alternative, indie, and rap artists together to create one of the largest concert festivals held in the United States.

Since there are so many artists at one festival, the tickets are in demand and lure in numerous different fans across the country. For some, going to Coachella has become a tradition.

Acts such as Zedd, A$AP Ferg, Arcade Fire, Outcast, Kid Cudi, and The 1975 are set to perform at the legendary festival. The varying genres and artists are appearing more on Coachella lineups and seem to impress the public each year.

Junior Komei Wang said, “My favorite artists on the lineup mostly include rappers such as Tom Odell, A$AP Ferg, Kid Cudi, and Chance The Rapper. I think the diversity is great because a lot of the genres go hand in hand and appeal to a lot of people.”

“I listen to alternative music more, but it’s really exciting to see all of the huge DJs and rap artists included on the lineup this year since I also enjoy their music,” added junior Jenna Mourad.

Due to Coachella’s popularity and diversity, students at Carlmont along with others across the country plan on going to Los Angeles, Calif. to get the ultimate concert experience.

Though Coachella has been going on since 1999, there is still a youthful vibe to the event that has been passed down through a few generations.

Carlmont senior Logan McPherson plans on going to Coachella. McPherson said, “I’m so excited to go to this festival because of how hard it is to get tickets and the fact that there is such an amazing lineup. I’m most excited to see Zedd, Skrillex, Krewella, and The 1975.”

“I feel so lucky to be able to go to such a huge and legendary concert festival. Some of the biggest bands in the world have played at Coachella, so it’s unbelievable to be able to go,” said Mourad.

From acoustic lovers to rap fanatics, Coachella is the place to see many artists that have dominated the alternative music charts over recent years.