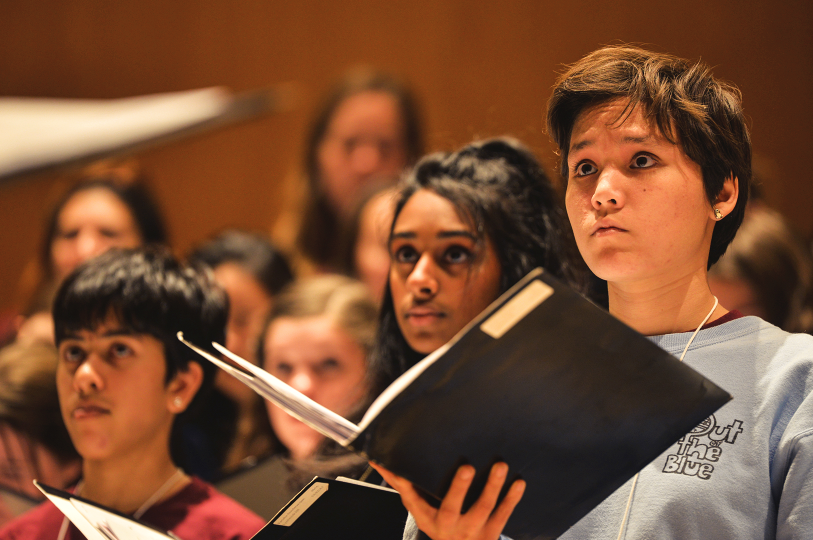 Robyn Peters, used with permission from the photographer

Amelia Espinosa, a senior, practices with the women's choir.

The stage is set, and the audience waits with anticipation as the singers take their places. There’s a beat, and the music begins.

After weeks of individually practicing and just two days of practicing with their choir, the students of Coastal Honor Choir performed in a concert on Saturday, Nov. 17.

Coastal Honor Choir is a choir that encompasses all people along the 101 freeway. Students have to audition with music theory and a solo, and if they get a high enough score, they’re accepted into the program. It is made up of three different choirs: men’s choir, mixed choir (consisting of both men and women), and women’s choir.

Originally, Coastal Honor Choir was slated to take place at San Mateo High School with rehearsals on Thursday and Friday and a concert on Saturday.

“Coastal Honor Choir is an excellent place to get together with a large choir of really high-performing kids,” said Genevieve Tep, the Carlmont choir teacher.

Tep said that she encourages students to audition because they don’t normally get to sing with such a large group of talented singers. Students not only audition for the experience but also to discover new things.

Adrian Fernandez, a junior, said, “I decided to audition because I wanted to put myself out there this year, and I also had a great experience last year, so I wanted to continue learning more and growing. Everyone at Coastal Honor Choir already has a great voice, but we can all develop further as good musicians.”

At Coastal Honor Choir, students did a lot more than just learn.

Sarah Dunwoody, a junior, said, “When I got there, I met other really talented and friendly people. My favorite part was being able to work hard with committed singers.”

Unfortunately, because of the bad air quality from the wildfires in the Sierra Nevada Foothills, the rehearsal and concert venue shut down. The rehearsal on Friday was canceled, and the concert on Saturday was relocated to San Jose State University. Each choir performed three out of the five songs they prepared because of this last-minute change.

For those who qualify, there is the All-State Honor Choir.

To get accepted, singers need to have participated in their regional honor choir — in this case, Coastal Honor Choir — and have a high enough audition score.

When asked for advice for future auditionees, Fernandez said, “You have to be confident in whatever you do, and confidence comes with practice.”