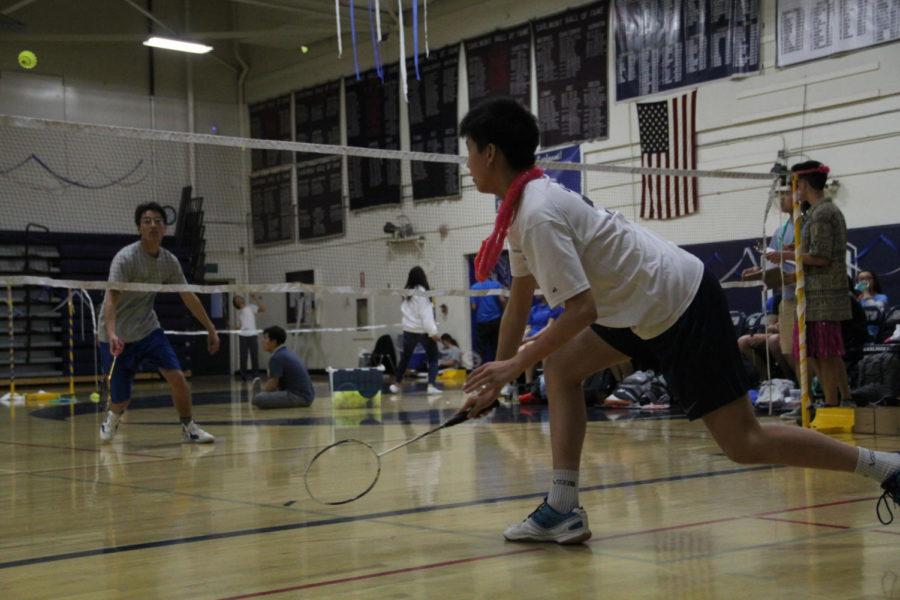 Jackson Tam, a sophomore, reaches for the birdie to avoid getting scored on.

Carlmont came out with fire to deny a win against rival South San Francisco.

The two teams had previously met on Mar. 15; that game also resulted in a win for Carlmont. In their final conference and home game of the season, the Scots looked to gain another win against the visiting Warriors.

The Scots came out red-hot as one match in the boys singles was won 21-1 by Alexander Wang, a junior.

Jackson Tam, a sophomore, also dominated his opponent in the boys singles by a score of 21-4.

“I was really inspired by the seniors’ enthusiasm. Their enthusiasm made me want to get a win for them in my match,” Tam said.

The girls singles were not as dominant, as Diana Freed, a sophomore, lost her match against South San Francisco’s Reaka Lin by a score of 5-21.

Carlmont also struggled in the girls doubles, as pairs Sofia Tam and Seema Wadhwa lost their game by a score of 11-21.

“It was tough losing in my match today because it’s senior night, and I really wanted to get a win for my team,” Sofia Tam said. “But it felt great to play our final home game of the season… I’m glad our team got a win.”

The boys doubles were led by seniors Haoran Wang and Hongming Zhao. They won their first match by a score of 21-19 and their second 21-11.

“I was really happy to help get a win today for my team,” Wang said.  “Even though this was my only year on the badminton team, I felt so great being honored today on senior night, and I think that getting a win today made it even more special.”

Some seniors also talked about playing in the final game of their high school career.

“I was amazed at the effort that was put in for the game today,” Erica Chen, a senior, said.  “There was so much love and effort which made it really special.”

“We wanted to do something really special for our seasons,”  Quan said. “We played really well, and I’m really proud of my team.”