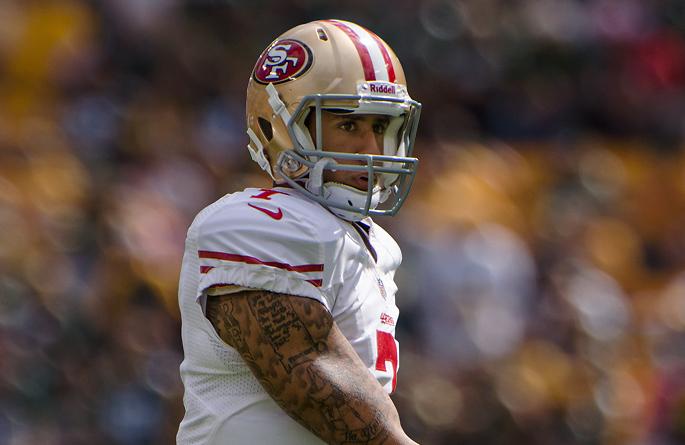 Colin Kaepernick stands on the field before a game. He is not yet signed to play in the NFL's 2017 season.

The 2017 NFL season kicked off on Sept. 7, and neglected bringing one of its greats along for the ride.

Former San Francisco 49ers quarterback Colin Kaepernick officially took a knee on the season after being denied a contract with the Seattle Seahawks in June. The contract was instead given to Austin Davis.

“Kaepernick is far more athletic and more proven than Davis is. The thing is, Kaepernick also isn’t winning games, so there is no reason he should be getting paid a lot,” said James Houston, a senior.

Some believe his skill outweighs many other players’ in the NFL.

“Considering all 32 teams have starting and backup quarterbacks, there are 64 spots available for quarterbacks. Kaepernick is definitely better than at least 10 or 20 of the quarterbacks filling those spots,” said Timmy Palthe, a senior.

While Kaepernick boasts starting in two NFC championship games and one Super Bowl, he also brings with him the baggage of free speech and an opinion, two traits that don’t bode well when it comes to fanbases.

In 2016, Kaepernick began a series of peaceful protests by sitting, and later kneeling, during the national anthem before a game. The protests were aimed to call attention to the oppression people of color face in the United States.

“I am not going to stand up to show pride in a flag for a country that oppresses black people and people of color,” Kaepernick said in an interview with NFL.com. “To me, this is bigger than football and it would be selfish on my part to look the other way. There are bodies in the street and people getting paid leave and getting away with murder.”

As the protest gained publicity and grew to other players in the league, so did the controversy surrounding the issue. So much so, it seems, that his career as a whole is now in jeopardy based on his using his fame as a platform for the cause.

According to Sports Illustrated, so many fans had negative opinions of Kaepernick that a team signing him would risk the loss of a fanbase.

“We did the study and the research [on Kaepernick] and we weren’t interested,” said Jacksonville Jaguars executive vice president Tom Coughlin.

In addition to losing a fanbase, signing Kaepernick could eventually lead to a loss of revenue in the NFL.

“I think Kaepernick should be back at some point this season,” said Houston. “My guess is that it will be with a team that is in desperate need of a quarterback and that they sign him for a minimal amount of money.”

Still, there is no question as to whether or not Kaepernick’s actions are affecting the NFL.

“Kaepernick sat and continues to sit during the national anthem. The skill is there but he’s a financial liability. The NFL makes about $13 to $15 billion dollars a year, so if you lose 1 percent of those billions due to one player, there’s actually somewhat of a valid reason he isn’t on [a] team. After all, the NFL is still a business,” said Houston.