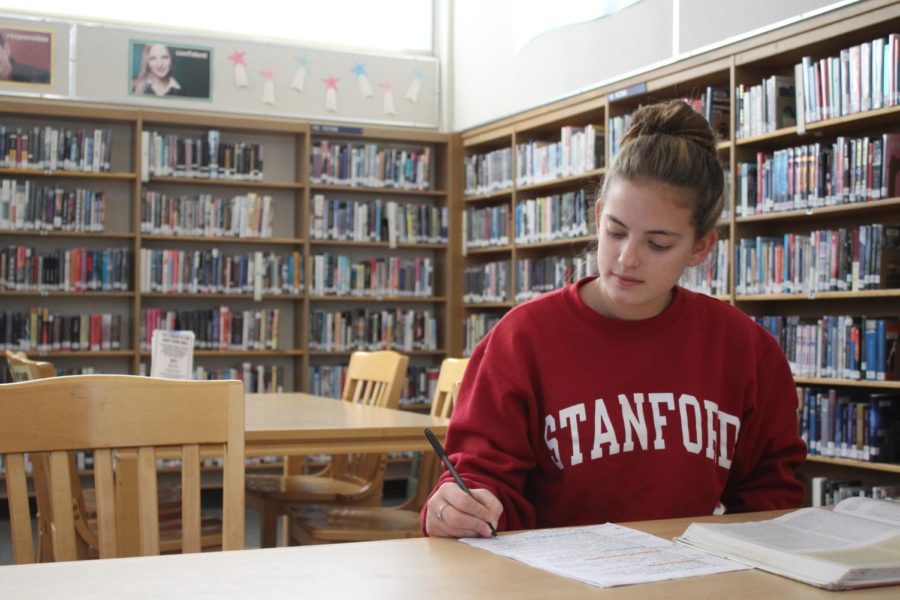 Tia Papapietro, a sophomore, dreams of going to Stanford and becoming a physical therapist.

Every day, students around the world push themselves to their physical and emotional limits in order to get accepted into these prestigious universities.

This exertion is often due to the opportunities and resources that a college graduate gains after they submit a resume with a university name such as Stanford on it.

While the most respected schools in America do not guarantee success after graduation, studies prove that those who attended the highest ranked schools earn 12 percent more than their peers who went to lower ranked schools.

The impact of one’s alma mater is most noticeable in computer engineering careers. According to The World University Rankings, Facebook and Google hire more than 80 percent of their employees from the top 200 schools in the U.S..

While most companies do not like to admit favoritism towards graduates from the top schools, the technology industry confirms that Stanford students are more appealing, according to Slate.

While hard work and dedication are said to be more valuable than a brand name of a college, society today continues to become more dependent on resumes due to their representation of the applicants behind them. Therefore, companies only call people in for interviews if they sound good on paper.

“In Japan, a lot of the hiring process had to do with what university the candidate went to and what company was supporting that university,” said Craig Van Anne, former CEO of RMS Japan.

This system eliminates the candidates not qualified for the position and allows the employers to focus on the applicants that are best suited for the job; these top candidates tend to come from prestigious colleges.

“I went to Japan and taught English. They highly regarded UCLA [University of California, Los Angeles] graduates, so it didn’t even matter that I hadn’t studied education. It was the fact that I spoke English and graduated from a school known to them that landed me the job. They interviewed me in Los Angeles, and it was kind of easy. They knew that any UCLA graduate would be fine for the job,” said Gail Murayama, who graduated in 1979.

The prestige of the top schools continues to grow each year as more students continue to apply and get rejected.

According to the MBA Acceptance Rate, Stanford’s acceptance rate in 1990 was 22 percent. However, by 2017, it had fallen to 4 percent. This drastic drop is the result of generations of emphasizing the importance of going to a good college.

The top universities earn prestige not only from acceptance rates but also from the number of connections they provide for graduates.

“I was introduced to a national ecology listserv by a graduate student I worked for and applied to a posting that sounded interesting,” said Malina Loeher, a 2015 UC Davis [University of California, Davis] graduate.

As a result of the constant need for millennials in modern technology companies, most students get job offers from well-respected companies before they graduate, according to Slate.

“After I went to school at UCLA, I had a very good professor who encouraged me to travel. When I went to Japan and told them I went to UCLA, the Japanese thought I was super bright. I did not know the impact that the school name had until then,” Maruyama said.

As much as society wants to imagine a world where dedication is all you need to succeed, that is not the case; college brand names have and continue to define the lives of graduates around the world.