Community mourns the loss of Liggett 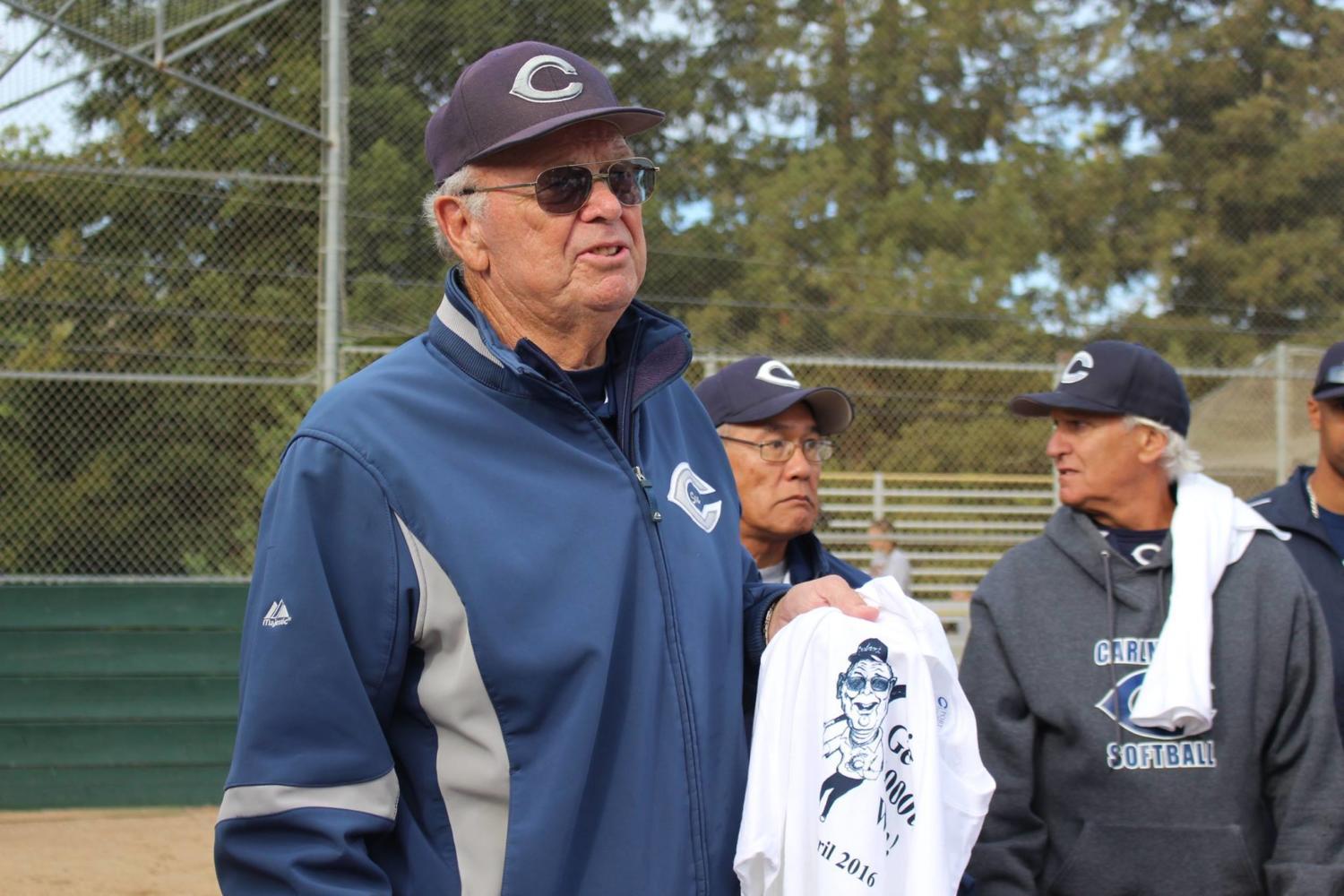 Jim Liggett is pictured at his thousandth win last year.

A Carlmont legend, coach, and teacher, Jim Liggett, passed away on June 4 at the age of 76.

Liggett invested over 40 years into the wellbeing of the Carlmont community.

Liggett started running the Carlmont softball program in 1976 and holds a state record of 1,009 wins.

His teams never failed to sustain the precedent of winning titles and qualifying for the Central Coast Section (CCS) playoffs every single year. Under his leadership, the Scots gained 28 South Peninsula and Peninsula Athletic League titles.

“His longevity is what sticks out the most. There are not too many people that work in one place for 50 or so years. Although he might be most known for his 41 years as a softball coach, he was also a PE teacher, a math teacher, a football coach, and a basketball coach at Carlmont. He gave so much of his time to the Carlmont community and I think a lot of people appreciated what he did,” said Carlmont Athletic Director Patrick Smith.

As the head football coach for 14 years, Liggett held seven PAL titles, the 1990 CCS championship, and a record of 114-42. Liggett also coached baseball, wrestling, basketball, and soccer as well as serving as the athletic director for six years.

Liggett’s consistency throughout his career enabled him to be successful despite engaging in many different areas of the community. In whatever sport he was leading, his values never changed or lost focus.

“I think what made Liggett special was how consistent he was throughout his coaching career. It did not matter whether he was coaching girls basketball or varsity football. The rules were the same. The expectations were the same. He coached the same way in his first year (1968) as he did in his last (2016). He was basic in his approach and did not get caught up in the latest coaching fads,” said Terry Stogner, former Carlmont coach and current PAL commissioner.

As with every successful coach, Liggett formed his coaching style around what he found to be the best methods. He established standards for his players in order to create growth and empathy.

Softball player and senior Cam Kondo said, “I think when people talk about Liggett, they think of the legacy he created for Carlmont softball. He always held us to a higher standard and wanted us to go out and compete in every game we played. He even came out to the games this year without him being the coach. I think he made the best of his days by spending them doing what he loved.”

For many, Liggett was not only a staff member at Carlmont, but he was also a friend. Liggett developed many relationships throughout the Carlmont community over the years.

“When I was dealing with my dad’s passing, Liggett was always checking in on me and making sure I was doing okay. He would always say to call him if I ever needed anything. Liggett was there for all of his players and he cared for every single one of us,” said Jamie Madigan, a senior.

Liggett never failed to put passion into everything he did and invested time into the lives of many people. He was full of good sportsmanship, quality, and friendliness.

Many who did not play sports got to know Liggett through his position as a substitute teacher.

One of the most well-known jokes that Liggett told students was “Ducks in Heaven,” which was posted on Carlmont alumni Dominic Gialdini’s Facebook.

Three women die in a car accident and go to Heaven. Saint Peter meets them at the Gates and welcomes them saying “you can do as you please in Heaven, just don’t step on any ducks.” The women are puzzled but proceed into Heaven. Looking around, they notice there are ducks everywhere. In a matter of minutes, one of the women steps on a duck. Saint Peter walks up to the woman with a hideously ugly man. Saint Peter shackles the man and the woman together and says, “for stepping on a duck, you have to spend eternity chained to this ugly man.” The other two women are shocked but go about their business until, sure enough, another woman steps on a duck. Immediately Saint Peter comes and shackles her to another ugly man. The last woman tries desperately to not step on a duck. After a few months of not stepping on any ducks, Saint Peter walks up to the woman accompanied by a stunningly handsome man. He shackles the woman to the man and after a while, the woman, being thrilled to be chained to such a handsome man, says “I don’t know what I did to deserve this.” The man replies, “I don’t know what you did lady, but I stepped on a duck.”

Gialdini further described him as a man of decency and was in awe of his soft-spoken nature inside the classroom while demonstrating sincere care for the students. Liggett took advantage of every minute of class while he was substituting.

“He would open up each class with five to ten minutes of jokes. I was always concerned administration may disapprove of this, but something tells me that, with Liggett, anything would go because he was such an iconic figure. He specialized in dumb blonde jokes, which he read off of the many pages of jokes that he came to class prepared with. He had a way of brightening up everyone’s days, and he knew just how to present his humor in a way that was tactful while still being enjoyable. You could tell that he was full of stories and experiences, and he was greatly admired by his students,” said Gialdini.

Gialdini’s sister and father also met Liggett when they were enrolled at Carlmont. They graduated with the class of 2012 and the class of 1980, respectively.  Gialdini’s father retold many stories of Liggett’s nobility in his early days, such as when busing began at Carlmont.

“When Carlmont started busing in students, there was a lot of tension. One time, there was a fist fight going on, and Liggett got in the middle of it to end it. I think someone was hitting him, and my dad’s friend jumped on the back of the person punching Liggett. It’s been a while since we’ve talked about it, but Dad’s friend would attest that Liggett was a man of integrity and bravery,” said Gialdini.

Liggett’s legacy, both on and off the field, will continue to be remembered through the profound impact he had on the Carlmont community.

“There are too many experiences to mention but his day-to-day interactions at school and in the community are something I will always value. Jim will always be considered a legend in the academic area as well as in the sports community,” said physical education teacher David Low.