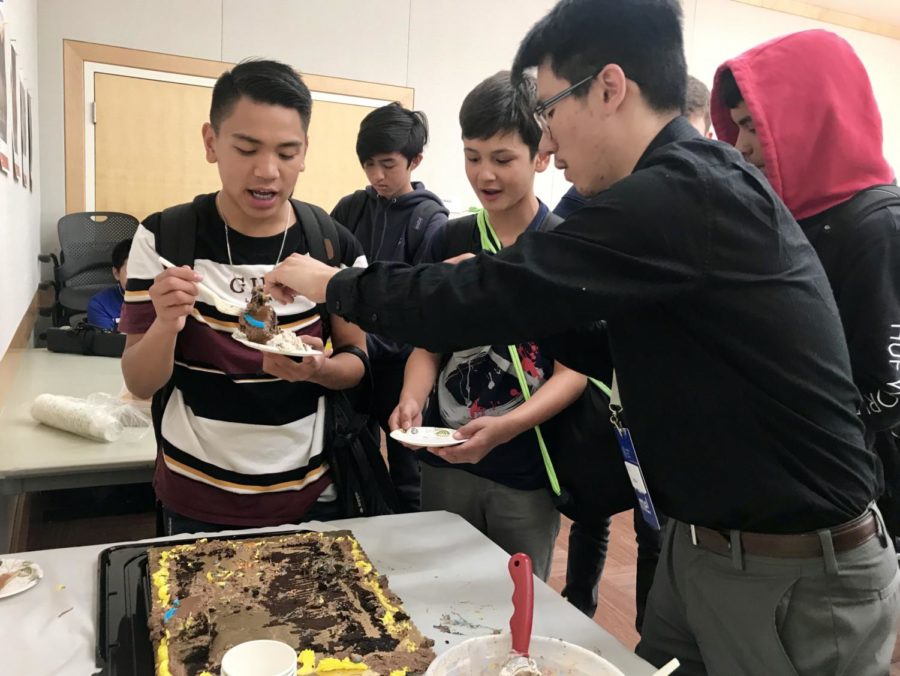 Jordan Kan cuts his "Congratulations Jordan" cake and gives out slices to students. Kan has been working at the library for almost four years and is finally moving on to become a pastor.

All good things must come to an end. With the end of the school year, Carlmont students who visit the Belmont library aren’t only going to lose the graduating seniors. Jordan Kan, a librarian, is also leaving the library to follow his dreams.

But for students who frequent the library, Kan, affectionately called “Dan” by some, is more than just a librarian.

“Freshman year, when I was still new to AS English and everything, I remember I got a B on an essay. I was heartbroken looking at the page and wondering, ‘why did I get this?’ He didn’t need to, but Jordan came up to me and started consoling me. I was crying in his arms and he gave me advice. That’s not even part of his job, yet he still did it,” Lisa Nguyen, a sophomore, said.

Kan is known for hanging out with the teenagers that go to the library and listening to all the new trends, drama, and memes the teens bring.

“Jordan is like our bridge between the library and the teens. There’s going to be some big shoes to fill when he leaves,” librarian David Vargas said.

After graduating from Univerity of California, Berkeley, Kan needed to get a few jobs to be able to afford higher education.

“My parents were very helpful; they paid for my undergrad. But for anything beyond that, I was on my own. So I needed to work for a while before entering school again,” Kan said.

Kan is leaving the library after four years of working there to become a pastor.

“Since high school, I have always been passionate about two fields: baseball and church ministry. If I were to go into the baseball field, it would take my weekends away and some weekdays for most of the year. I would also have to travel for work and I would rather stay close to home. So instead, I decided I would go into church ministry,” Kan said.

Kan will be attending Western Seminary for the 2019-20 school year and work toward a master’s degree in divinity. His last day working as a librarian will be after Ralston Middle School finishes school in June.

To celebrate Kan’s service, the library organized a farewell party and bought him a cake with “Goodbye Jordan” written on it. Along with the cake, other snacks like Oreos, onion rings, and an apple pie were available to partygoers. There was also a speaker playing Kan’s favorite music: ’70s music.

“I loved it. There was a ton of people of all ages from middle school to high school that came to enjoy food and hang out,” Kan said.

For someone as beloved among the library community as himself, it will be difficult to watch him leave.

“Next year it’ll be different without him. He’s always here to greet you so it will be less friendly around here without him,” said Hanna Li, a junior.

Everyone in the library, staff and students alike, will remember him forever and wishes him luck on his career.

“Every day after school when I go to the library, Jordan greets each student coming in. I wish him luck in college and I know he’s going to do amazing things in life. We’re all going to miss him,” Zaida Raskin, a junior, said.