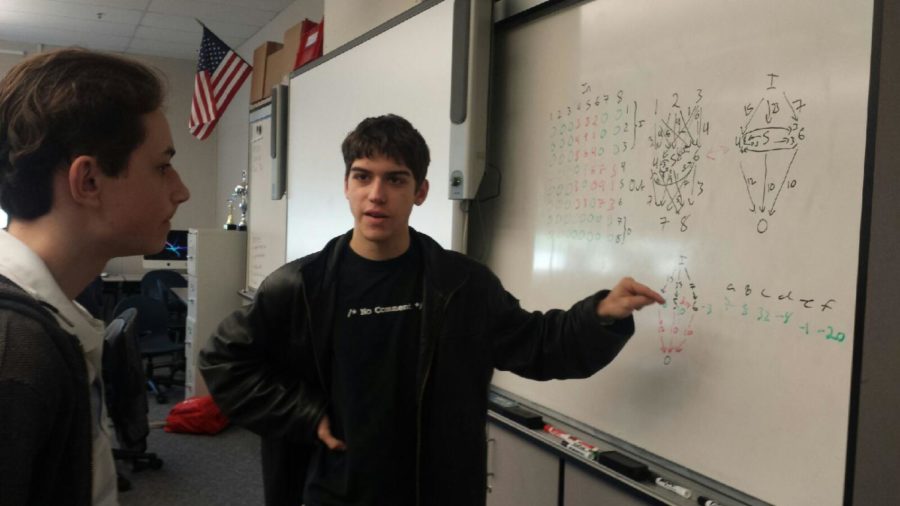 Seniors Blake Thomas and Edward Vendrow discuss a problem on the whiteboard.

Lunch can be a peaceful or chaotic time. For Computer Science Club members, it can consist of problem-solving with friends.

“Computer Science Club is there to help you learn about computer science and to let you participate in events relating to programming. We do several competitions every year. If you don’t want to do that, you can learn how to program,” said senior and club president Edward Vendrow.

During club meetings, students gather around computers playing games, programming, or chatting and eating with their peers.

“I joined this club my freshman year because I was interested in coding. It ended up being an awesome way to get to know other people that like to code and to go to competitions and hang out,” said Josh Vendrow, a senior.

Sophomore Selena Sun is currently enrolled in AP Computer Science at Carlmont and has found the club to be an opportunity to enhance her knowledge of coding.

“Since we live in Silicon Valley, knowing how to code is extremely valuable. I just started this year actually; I didn’t really know any Java beforehand. With this class, I really love it now,” said Sun.

According to the Bureau of Labor Statistics, computer programmers write and test code that allows computer applications and software programs to function properly. They turn the program designs created by software developers and engineers into instructions that a computer can follow.

Computer Science Club may be an academic club geared towards practicing a skill, but as Vendrow points out, it can also be quite fun.

“During competitions, you come in, you eat free donuts, you sit down at a computer, and you just solve problems; it’s like any other kind of competition. For us, the time limit is around three hours — it sounds daunting, but it’s super fun. You get to hang out with people and code some problems,” said Josh Vendrow, “During one hack-a-thon, we took over one of the company’s conference rooms and stayed in there for around ten hours. People just hung out, listening to music and dancing and playing games.”

Computer Science Club meets every Monday in D23, and all students are welcome.

“Computer science isn’t something that’s solely for nerds or people who started when they were 5 or 6 years old. Just try it; you might like it,” said Sun.