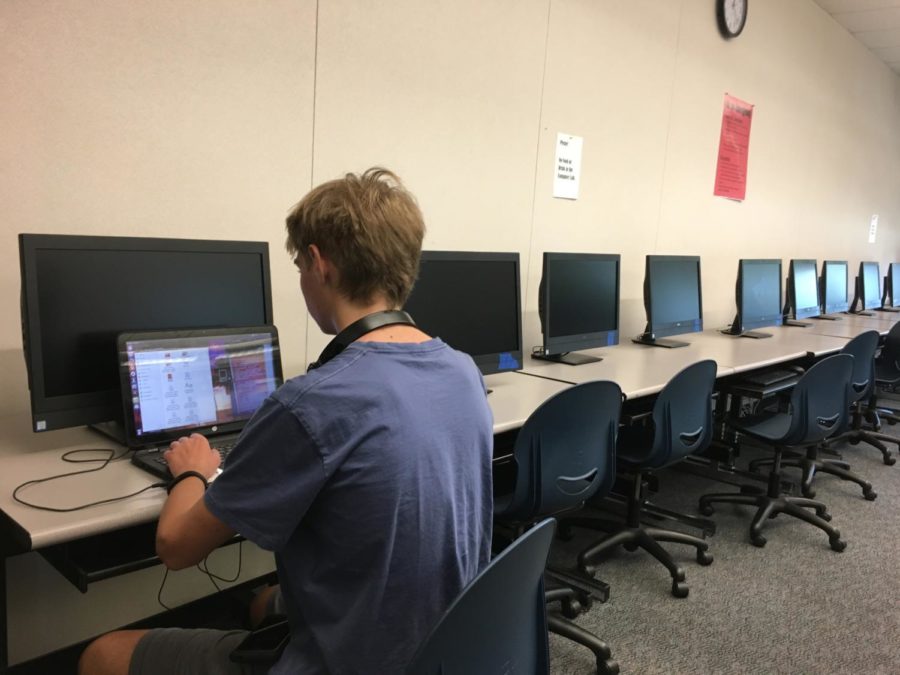 One of the club members stays in the classroom after lunch to finish their current computer science exercise.

The Computer Science Club provides students with a learning environment and preparation for programming competitions.

New members can learn programming while older members can practice their computer science skills and learn about new computer challenges, all while getting ready for competitions.

“We want to facilitate learning computer science for both beginners and experienced members in addition to going to competitions,” said Club President Edward Vendrow, a senior.

The club is an option for students who are unable to take the Computer Science class offered at Carlmont.

Since the mentors and advisers are not actually teaching computer science, students work on their own and with each other to improve their skills. Most students already have some knowledge and experience with programming and computer science before coming to the club, but beginners are welcome to attend and practice computer science-related things.

“We encourage new members and beginners to come, but we don’t actually teach computer science here. Our main focus is on the competitions,” said Club Adviser Karyn Voldstad.

The club is planning to participate in more competitions throughout the year. The club leaders recently announced a new computer challenge to the members.

During usual meetings, the leaders show a mini presentation announcing any upcoming events, and then let people work on any projects on their own. The club has a number of students who enjoy attending the club for various reasons.

“I like this club because I like programming. I knew how to program before coming to the club, but it’s still helpful to have more experienced members around,” said club member  and freshman Katherine Taylor.

The leaders want to encourage more people to do computer science-related activities, especially outside of class.

“We want to spread interest about computer science and and teach those that want to do it. We want people to compete and do things outside of school,” said Vice President Joshua Vendrow, a senior.

The Computer Science Club has gone on competitions in the past, most of them being corporate-sponsored. The club has won many trophies. They usually compete in small teams and attempt to solve programming problems.

“We usually compete in teams of three and try to solve as many problems as we can in the given amount of time,” said Edward Vendrow.

Although the club isn’t advertised a lot, the club attracts around two dozen members for regular meetings. Students who like computer science find the club and join.

“We don’t really advertise a lot. We have been on the announcements before, but most people who like programming find out about the club somehow,” said Joshua Vendrow.

The Computer Science Club focuses on competition and tries to get members more involved in computer science and programming.

The Computer Science Club meets every Monday in D23.