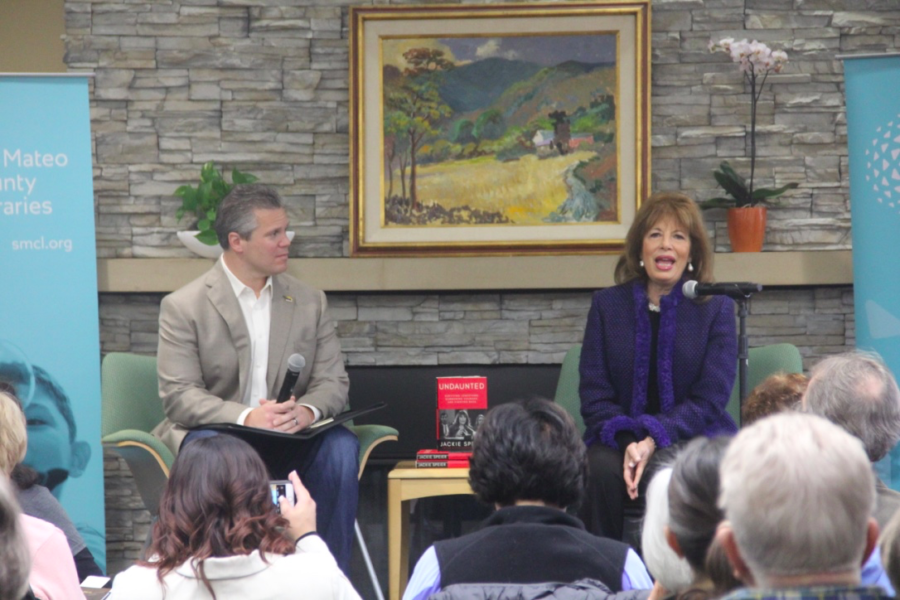 Jackie Speier and Charles Stone speak about resilience and Speier's experiences. After talking about herself, Speier signed copies of her book for the audience.

Jackie Speier. A congresswoman. An author. And a fighter.

Speier visited the Belmont library on Feb. 9 to talk about her book and her life. The library estimates there were more than 400 people that attended.

In her personal memoir, “Undaunted: Surviving Jonestown, Summoning Courage, and Fighting Back,” Speier tells the powerful story of her life and her survival in the Jonestown massacre, a tragedy that took more than 900 lives. As a result of Jonestown, she was shot five times and left alone for 22 hours before she was rescued. She recounted that her last will to live was her grandmother.

“All I could think was, ‘I am not going to make Grandma live through my funeral, not if I could help it,’” said Speier in her memoir.

In addition to Jonestown, she also spoke about being a widow and how her experiences dealing with her late husband Steve Sierra’s death.

“Everyone focuses on Jonestown. Yes I was shot five times, but the silver lining of Jonestown was that I survived. It was much harder getting through Steve’s death. After he died, a part of me went with him,” Speier said.

Many of the audience members were moved by her story of survival.

“It’s hard to believe the things that she’s endured and survived, and it’s inspiring for me to listen to someone like that,” said Sashi Smith, an audience member.

She later began to talk about various acts and laws she was trying to pass. Some of these included the ME TOO congress act and the Green New Deal.

She also said if you want something to happen, let your local government know.

“Write to your local mayors or congressmen and women. Organize marches because it is your right to do so. Know that it will make a difference,” Speier said.

She also talked about medicare in the U.S..

“Medicare for all is where our aspirational goals should be. We are the only industrialized nation that doesn’t have medicare for all, and I think that should change,” Speier said.

After she spoke with Charles Stone and some of the audience members, she signed copies of her book and took pictures with people individually.

“I’m reaching out for my own students. They need to know they have a voice in the community. That’s the best thing about teaching: we see the hope that is in the future generation,” Glover said.

Davina Hurt, the vice mayor of Belmont also attended the meeting. She also looks up to Speier’s resilience through her hardships.

“She is an inspiration for everyone who is looking for justice and has had some tragedies in their lives. Young people can learn resilience through her. It’s marvelous she’s our congresswoman and fighting in Washington for all people,” Hurt said.