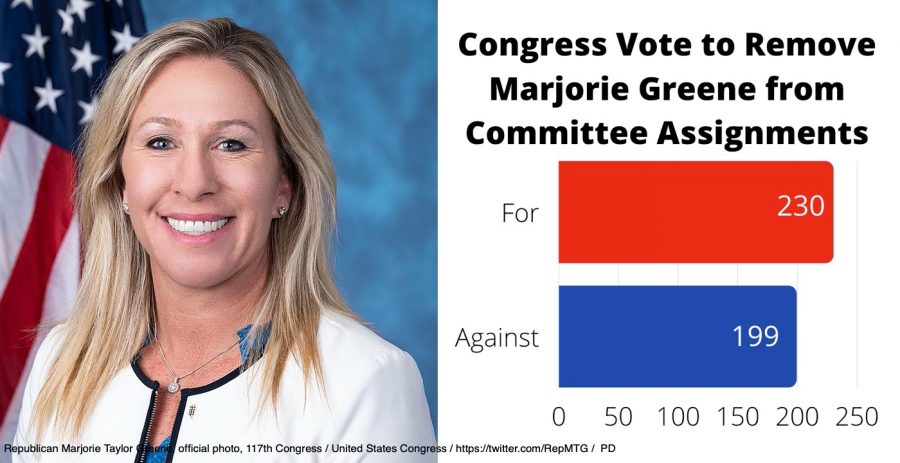 On Feb. 4, Representative Marjorie Greene was stripped of her House committee positions. All of the Democrats and 11 Republicans voted for her removal

Many believe that one of the potential dangers to a democracy is a possible lack of knowledge in the voting population on key issues. Specifically, the danger lies in how a lack of knowledge can cause false information to mislead people.

A prime example of a conspiracy theorist in modern politics is the case of first-term Rep. Marjorie Taylor Greene (R-Ga.).

Greene was elected into Congress as a representative of the 14th district of Georgia in November 2020. She is a Republican who has supported former president Donald Trump and was also in support of the vote to overturn the 2020 presidential election results.

As of Feb. 4, she was removed from both of her House committees — most notably the Education and Labor committee — due to past comments supporting various conspiracies.

On her Twitter platform, Greene wrote a statement referring to a conspiracy theory that suggests a Jewish space laser is to blame for the California wildfires.

“There are all these people who have said they saw what looked like lasers or blue beams of light causing the [California] fires,” Greene said.

This is not the only conspiracy Greene has endorsed. She has also promoted theories like the tragedy of 9/11 being faked, gun control lobbyists faking school shootings, and Pizzagate.

Speaker of the House Nancy Pelosi, D-Ca, has criticized Greene for her comments as well as House Minority Leader Kevin McCarthy, R-Ca, for how he has led the general Republican response to them.

“McCarthy’s failure to lead his party effectively hands the keys over to Greene—an anti-Semite, QAnon adherent and 9/11 Truther,” Pelosi said.

Along with all other House Democrats, Pelosi voted in favor of removing Greene from her committees. However, while most Democrats were united in the decision to remove Greene, the Republican Party was split.

“Past comments from and endorsed by Marjorie Taylor Greene on school shootings, political violence, and anti-Semitic conspiracy theories do not represent the values or beliefs of the House Republican Conference,” McCarthy said.

Though McCarthy condemned Greene’s promotion of conspiracy theories, he also refused to support removing her from committees, calling it a partisan power grab.

Most Republican representatives followed McCarthy, with only 11 votes to remove her from the committees.

In contrast, the Senate Republicans were far less supportive, with most following Senate Minority Leader Mitch McConnell, who had condemned Greene’s support of lies and conspiracy theories.

Among both the Democrats and Republicans of Congress, there is a general consensus among many that Greene’s promotion of conspiracies gives the country, and the Republican party, a rather negative image.

“It would be hugely irresponsible to let someone serve in an impactful position when they have repeatedly shown a tendency to believe in harmful, insane conspiracy theories,” Yao said. “Especially when said theories directly hurt what their position is trying to protect and achieve.”