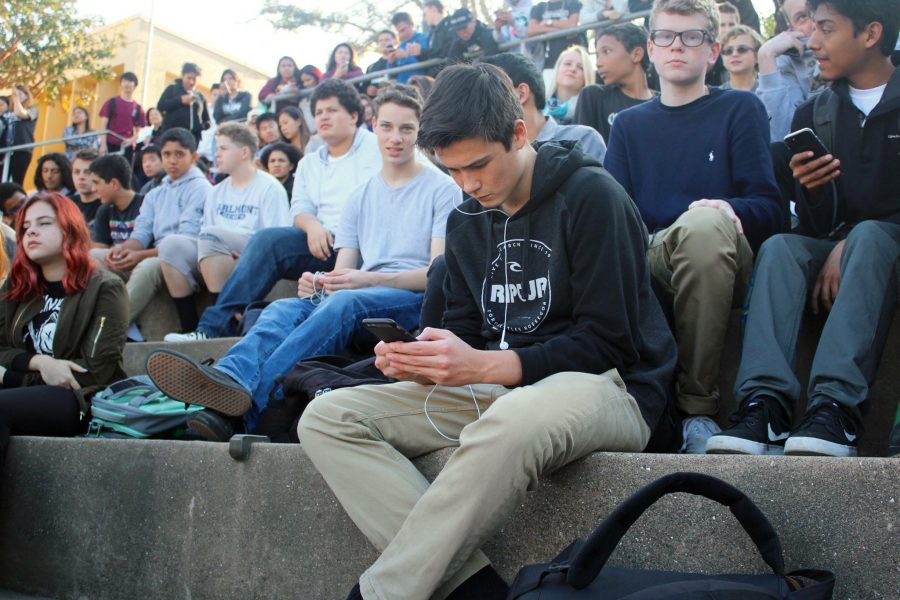 While some students participated in the protest, others saw it as an easy way to get out of class because of the lenient attendance policy.

That was one of the many catchy chants thrown out into the crowd during the so-called anti-Trump protest in the quad.

The rally was originally publicized on social media as a peaceful protest. However, the students who wanted to participate in it faced the consequence of receiving a cut on their transcript. The “protest” ultimately turned into an “administration-supervised pep rally” complete with music and iconic Scots’ spirit.

Students’ interest in the protest changed throughout the day because they weren’t sure of the attendance policy.

Students who had no interest in going to the rally were emboldened to attend once they heard administration had decided not to give cuts, which meant no consequences were in their way.

This sudden change in heart plays into the idea of protesting only when it’s convenient for the person. It’s easy to send out a tweet detailing one’s disappointment of the election outcome, but the moment there is a consequence for that action, people are quick to shy away from expressing their opinions.

Famous protests throughout history have been linked with acts of civil disobedience, which is what made a lot of them effective. Risking a cut from a class was enough to send most students away from the rally, not wanting to perform even the most minute act of civil disobedience in order to get their opinions heard.

The rally that took place was by no means a failure in promoting unity on the Carlmont campus, it just wasn’t an effective protest.

Another part that plays into the ineffectiveness of the rally is the location. It’s easy to hold an anti-Trump protest at Carlmont, which is a liberal bubble within a bubble in yet another bubble. A few people that might have opposed the protest would not speak up against it because they would represent the minority.

To try and promote change, people have to leave the bubble, leave their comfort zone and try and make a difference in a place that’s not as progressive as the Bay Area. People have to go to those areas that are scary and red for a person representing a little speck of blue and chant there, protest there, and promote unity there.

Be inconvenient, for that is the only hope for real change.