Parents are overstepping their support by selling cookies for their Girl Scouts. That needs to change. 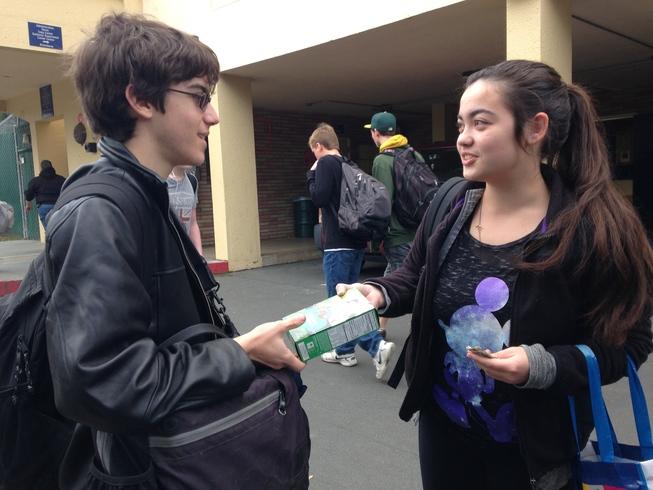 Sophomore and Girl Scout Daisha Sherman connects with a customer over Thin Mints, thanking him for his purchase.

‘Tis the season… of Thin Mints, Samoas, and Tagalongs, sold by Girl Scouts, with profits going back to an inspiring community of girls.

Girl Scouts span a variety of ages, and many high school Scouts can be seen at Carlmont carting boxes upon boxes of cookies, enticing high school students and teachers.

This annual tradition kills two birds with one stone — cookies are a successful business model, and Scouts learn lifelong skills along the way.

But not all of these delicious cookies are sold by Girl Scouts themselves.

This is a depressing step backwards, especially considering the Scouts’ long and proud history.

Since 1912, the Girl Scouts have played a major role in 100 years of history. They participated in relief efforts during the Great Depression, flew in the Wing Scouts program during the World War II, and held Speak Out conferences during the fight for racial equality. Despite the new age of technology, they have stayed true to their roots by connecting with the outdoors.

To fund their activities, they started selling cookies in 1917, which has proven to be both popular and profitable.

According to ABC News, about 200 million boxes of cookies are sold each year. However, these cookies go beyond just providing funds for the Scouts.

Cookies build Girl Scouts. They contribute to the mission of building “girls of courage, confidence, and character who make the world a better place.”

So after more than 100 years of building self-reliant girls, why is it that it’s no longer just Girl Scouts selling cookies?

Sophomore Ryan Leung said, “I bought Thin Mints from a friend whose sister is a Girl Scout, and after he sold the cookies he gave the money to her.”

Nothing may seem amiss at first. After all, it is just a cookie transaction.

But there is something wrong with that.

Girl Scout and junior Megan Wadleigh said, “The Girl Scouts emphasize honesty, fairness, and responsibility. I think that parents selling cookies on behalf of their girls runs counter to those ideals.”

This contrasts sharply with the principles on which the Girl Scouts were founded.

So let the Girl Scouts go. Provide a support network, but remember that “support” has some limits.

Anyone selling cookies other than the Girl Scouts themselves only does disgrace to an organization so powerful and inspiring.

Cookies are for Girl Scouts to sell. Let us keep it that way.