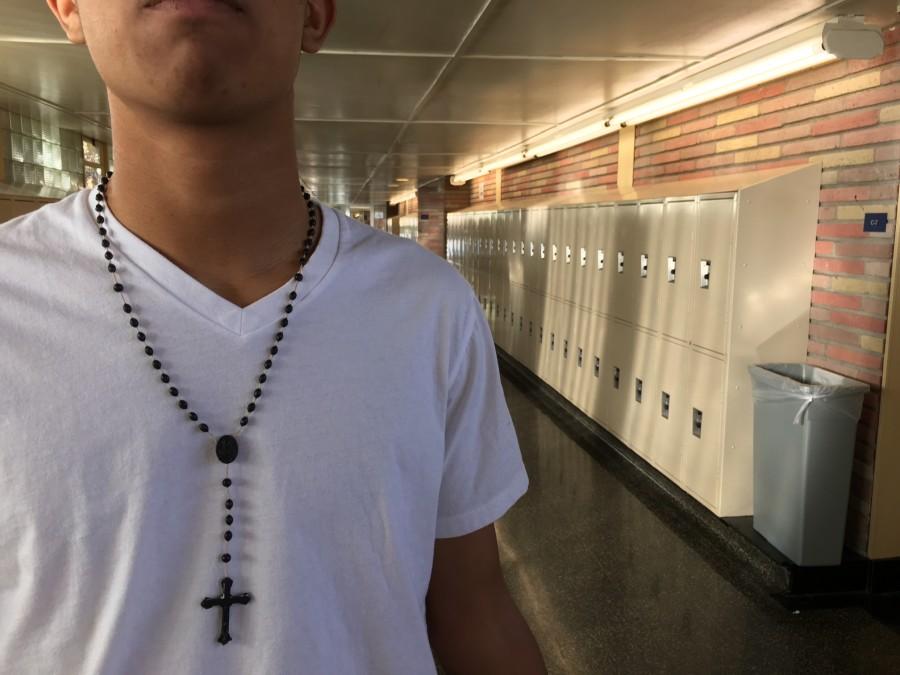 Wearing his cross on his neck, sophomore Josef Gonzalez walks down the halls of Carlmont.

Many people who define themselves with some sort of religion in today’s society are not comfortable with making their religion known to others. With elements like the media and religious stereotypes, many people of faith are sometimes ashamed to express their beliefs, as they may face discrimination.

Up until the 1700s, religion defined all aspects of life. Religion separated people into different social classes and countries that shaped today’s world, and people were proud to say that they were a member of their faith.

However, times have changed, most noticeably in westernized areas of the world, where religion has slowly become less and less important to most people. One’s beliefs were once nothing to hide, but now it seems to be something that people may not want others to know.

Senior Max Lieberman, leader of the Jewish Club said, “In general, there are a lot of stigmas against certain religions because of the media.”

Recently, the extremist group ISIS attacked France. Some students at Carlmont believe that the media misleads many people into believing that the entire Muslim population are jihad extremists.

“People just assume all Muslims are terrorists because that is what the media has to say. There are many stereotypes towards all sorts of religions,” said sophomore Kiana Philip.

These stereotypes make others that are religious feel uncomfortable about making their beliefs public.

Freshmen Muaath Nofao, a devout Muslim, said, “Many students are afraid to express their religion because they are scared of being made fun of, and stereotypes put people down for no reason.”

Nofao is extremely committed to his faith and prays to Mecca five times a day. He is not at all afraid to show off who he is.

At Carlmont, clubs like the Jewish Club, the Christian Club, and the Muslim Fellowship Club help to put these stereotypes away and show what each religion actually is. They also help people of faith feel safe in a community that is becoming increasingly secular.

“The purpose of our group is to define Muslims for ourselves, instead of letting the media define us, to practice our religion to the fullest, stand up for our rights, and against any injustice,” said Naser Abdelrahman, the leader of the Muslim Fellowship Club.

“Our group’s purpose is to bring together Christians of our age to gain a better connection with one another and to have another friend here at Carlmont,” said senior Kelly Olivier, the president of the Christian Club.

These groups bring comfort to people of faith at Carlmont. They accept anyone, even if they are not of the religion, in hopes to educate everyone about the belief.

“Max, Naser, and I are all planning an event with all of the clubs of faith to bring us together so we can learn of our cultures and create a sense of companionship,” said Olivier.

This event will bring together all of the members of each club so that one can learn from another and accept each belief.

When asked about this collaborative event, sophomore Anthony Arteaga said, “This could be good for our diverse school, because it will bring people together that may not normally understand each other.”

Other students gave their own opinions on how people can be more accepting towards other religions.

“The best way for one to recognize another faith is to educate about it. Once someone knows what a belief is about, they will be able to better understand it and come to see that it isn’t what the world portrays it as,” said freshmen Kayla Gustafson.

This fits well with the purpose of the religious clubs at Carlmont.

Abdelrahman said, “The Muslim Fellowship Club is here to educate about the religion. Just as long as you have an open-mindset, you will see that we aren’t what the media says we are.”

Junior Kyle Kawakami sees that education does help, but also sees confidence as an important key to the issue.

Kawakami said,“If someone can learn to become more confident in their religion, then stereotypes won’t even bother them. They will be able to express their religion freely.”

Carlmont seems to be in a good place when it comes to religious acceptance, and does not seem to be facing the problem of being an unsafe environment to express faith. As for the rest of the world, stigmas and stereotypes still exist towards the beliefs of others.

Sophomore Zane VanArsdel said, “Carlmont may be a comfortable place to be, but most other places across the planet are still unaccepting of anything that isn’t the norm.”