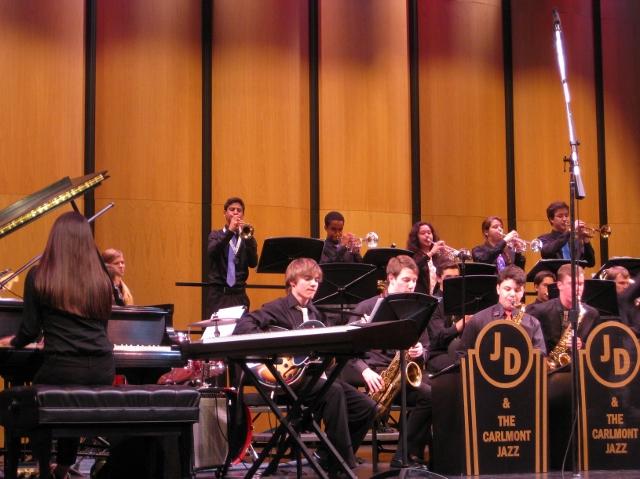 On Friday, May 16, Carlmont’s semi-annual Jazz Night marked the return of director John DaBaldo (JD) to “JD and the Carlmont Jazz” after a three-month absence.

DaBaldo said, “I’m thrilled to be back. I missed Carlmont, and I particularly missed my students.”

He returned with only three rehearsals remaining before Jazz Night, two of which were missing about half of the students due to Advanced Placement (AP) testing.

Finally, on the day of the concert, DaBaldo had one light rehearsal with all 20 members of Jazz Ensemble together.

Senior Martin Adams, who plays guitar in the ensemble, said, “Because of DaBaldo’s absence, we’ve really had to come together as a unit. We picked out some tunes a while ago that we thought would be challenging but fun to play, and it all came together in the past few weeks.”

Kaelen Ghandhi, along with Adams, played a key role in picking out the ensemble’s music.

“It was our duty to step in and make sure that the band kept improving. At lunch [we went in] to pick out new music for us to play to keep our repertoire [from] going stale,” Ghandhi said.

Sophomore Kendall Kaufmann of the Early Morning Jazz Ensemble said, “My favorite piece [that we played] was ‘A Night in Havana.’ We were extremely prepared because we had [already] played it and gotten feedback from the judges at the Santa Cruz Jazz Festival.”

Although all of the jazz students had been playing at festivals throughout the year, not all of the pieces had been previously performed.

Of the first three performing groups, audience member Clara Romani said, “I liked that the groups of different sizes let individuals shine in their solos as well as in the group. They listened to each other and played together in a way that complimented each other’s sound.”

DaBaldo conducted “Come Fly with Me,” in which senior Miles Coe traded his saxophone for a microphone and sang lead. DaBaldo also ended the show with “Spin Cycle.”

Romani especially enjoyed “Nice to Meet You,” conducted by Instrumental Music Director Lieven Smart. The piece showcased all of the ensemble’s seniors with their own solos.

Romani said, “I was entertained the whole time. I could see how talented the performers were and how hard they had worked.”