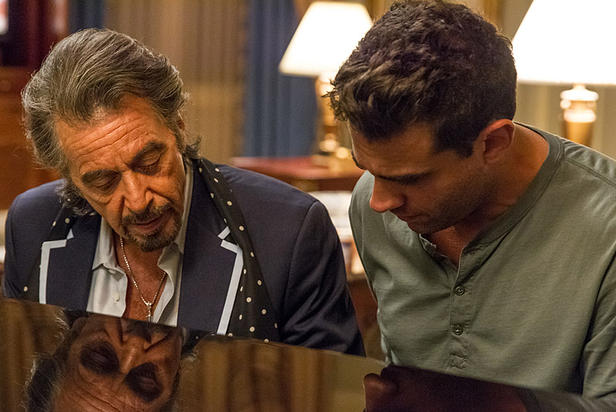 Danny Collins (Al Pacino) teaches his trade to his son (Bobby Cannavale) in an effort to earn trust and a place within the family.

The world-weary rockstar gazed dejectedly at the travesty his life had become — his unfaithful fiancée who was half his age lay on the lawn of his mega-billion dollar mansion sleeping off a drink. His household staff plucked the remnants of the party off the ground. His only semblance of family remained out of sight and out of mind.

But everything changed when his manager presented him with a letter from John Lennon that was intended to arrive 40 years ago. With catalyst in hand, Danny Collins (Al Pacino) had an excuse to turn his life around.

“Danny Collins” (R) comments on the now well-known concept that being rich and famous is not an inherently fulfilling lifestyle. Seeping through the lighthearted jests prevalent in this film, an aura of duty emerges. We come to realize, through another man’s mistakes, that family and kindness come first.

With cinematic mastery and nail-biting realism, “Danny Collins” commanded the audience’s attention. A tumultuous ride of ups and downs, the film explored veritable tragedy alongside unbelievable fantasy. It tenderly strokes a sentimental bone while tickling the funny bone.

Endearingly sweet while still remaining solemn, the film appeals to the entire spectrum of human emotion. We “awe” at the adorable blonde-haired granddaughter and gasp disapprovingly at the lines of cocaine Collins snorts backstage. But no matter how seriously he messes up, we cannot help but love Collins.

His playful personality is simply sublime. He’s got the countenance of a feisty grandfather but the approachability of a kitten.

A charismatic creative genius, Collins wins the adulation of all… except, it would seem, the one woman whom he attempts to woo throughout the story.

When all is considered thoroughly, an unintentional irony arises — that a person with such moral purity as Collins would choose to squander his life the way he did. I suppose we are supposed to chock it up to the corrupting nature of fame, yet this still seems loosely formulated.

The movie’s most admirable quality was its spot-on wit. The dialogue bounced with the velocity of ping-pong balls, snapping surefire jokes at pinpointed pressure points. The humor is tasteful and well-developed, always hitting its mark.

A remarkable fact about “Danny Collins” is that it is loosely based on a true occurrence.

The soundtrack tied the whole piece together beautifully. Vacillating emotions were accompanied by a gratifying blend of Lennon and Bach.

Though the theater was naturally filled with the more mature members of society, this film is enjoyable to people of all ages.

The smoothly carved film that was “Danny Collins” fills a hole in life by effortlessly living it.

Whadya think about that?