Day of Silence speaks for those who cannot 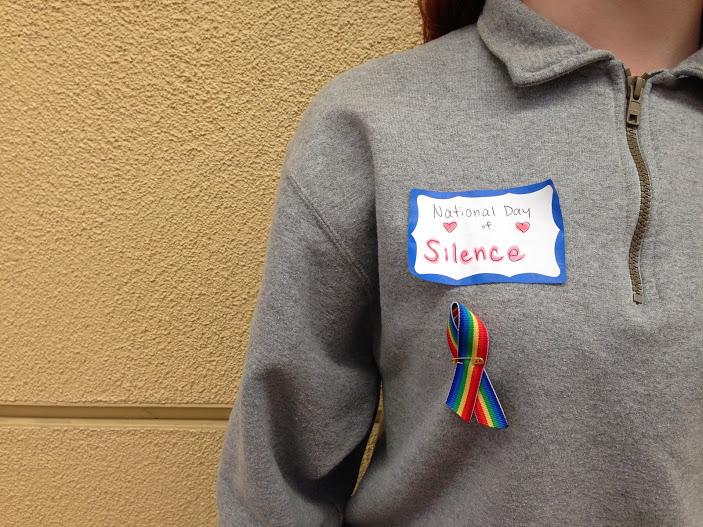 “Strength in numbers. Solidarity in silence.”

For one day each year, high school students take a silent stand against anti-LGBT+ bullying. This year, Carlmont celebrated Day of Silence on April 10.

Sponsored by the Gay, Lesbian and Straight Education Network (GLSEN), the Day of Silence illustrates the harmful effects bullying creates within the LGBT+ community.

GLSEN.org describes the day as a “student-led national event that brings attention to anti-LGBT name-calling, bullying and harassment in schools.”

While this year’s National Day of Silence is April 17, Carlmont’s Harmony club celebrated the event a week early due to exam scheduling.

Junior Sarah Schisla is the co-president of Harmony club and founder of The Harmony Project, an LGBT+ group for queer folks and their allies around the country.

“The event represents the daily struggle that many closeted queer people — and even those who are ‘out’ — go through every day. Many LGBT+ folks can’t always say everything they want to because they may not be in the right place with the right people,” said Schisla. “For one day a year, dozens of Carlmont students participate in Day of Silence and get an idea of how that feels.”

Students at the University of Virginia organized the first Day of Silence in 1996, in response to a class assignment on non-violent protests. With just over 150 students participating in the inaugural event, the Day of Silence has evolved into a global event, reaching thousands of students in countries such as New Zealand, Singapore, and Russia.

GLSEN became the official organizational sponsor for Day of Silence in 2001. Since then, the event has become a major part of the LGBT+ community.

“The event serves to demonstrate the silencing effect that bullying can have on people. It shuts them down and shuts their voice out. While this is true for all students, it especially pertains to queer youth,” said Schisla.

English teacher Erik Migdail is a strong believer in the event’s significance.

“It feels like attitudes around the LGBT community in high school have been changing — the conversations certainly have — and the eloquent silence of this day has been a big part of that. Over the years, I’ve watched the Day of Silence grow in strength and momentum, and I’m sure it will continue to raise awareness of bullying and harassment of the LGBT community, thus continuing to be a positive force for change,” he said.

Harmony members hope to continue the tradition of hosting Day of Silence for years to come.

Junior and co-president of Harmony club Sierra Segal said, “I participate in the event because it’s important to me that people, especially students, understand the impact bullying can have on an individual or group.”