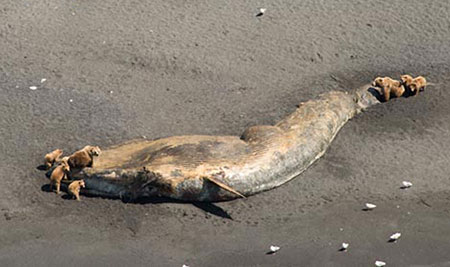 Bears feed on the whale carcass, which was found in Larson Bay, AK.

More than 100 feet long and up to 200 tons, whales are complex and beautiful giants, roaming the sea as the largest, loudest animals on the planet. Whales sit at the top of the food chain and play a significant role in the healthy functioning of the marine environment, according to World Wildlife.

However, in the 1900s and even now, some see whales better off dead than alive.

Until 1970, hunters heavily targeted whales for commercial profit, causing 66 to 90 percent of the animals to disappear, according to National Geographic. Since then, some whale species have been making a slow recovery while most have become endangered.

Since May of 2015, 30 dead whales have washed up on Alaskan coastlines, according to the National Oceanic and Atmospheric Administration (NOAA).

The NOAA declared the whale deaths an unusual mortality event (UME) on Aug. 20 and began an official investigation.

It is not the first time the world has witnessed an alarming number of dead whales. Since 1991, there have been 61 UMEs across the United States. Five of them have been large whale UMEs.

This is the sixth.

It takes months and sometimes years to present decisive evidence for a UME. However, scientists and researchers have already posed several causes to the deaths.

“Our leading theory at this point is that the harmful algal bloom has contributed to the deaths,” said NOAA spokesperson Julie Speegle, to the Guardian. “But we have no conclusive evidence. The bottom line is we don’t know what’s causing these deaths.”

The record-breaking algal bloom continues to expand, stretching from the Aleutian Islands to southern California.

Shellfish and fish eat the toxic algae, which exposes their predators, including marine mammals and humans, to the toxins. Ingesting the toxin can result in illness and death.

Biology teacher Julie Paoli said, “One thing that humans seem to forget is that we are also part of the ecosystem.  We are animals and even though we are not part of the whales’ food chain – we are still connected – changes in their population can change things for us in the long run.”

Northeastern Pacific waters are higher than normal, according to the NOAA. The warmer water stretches to the Gulf of Alaska, where the majority of the whales died. Warm conditions increase algal bloom, causing an increase in toxins.

Paoli said, “We are mammals as well. Can we learn something important about our own health from this? I think if we can figure out if we are causing it we can hopefully change our actions.”

According to Alaska Public Media, the Navy began training in and near the Gulf of Alaska in June of 2015, around the time dead whales began appearing on Alaska’s coastline.

But according to Speegle, there is currently no evidence linking the whale deaths to military activities.

However, there is an explanation as to why naval training could possibly be linked to the whale deaths.

Whales heavily rely on their hearing to communicate with others, according to the Natural Resources Defense Council (NRDC). For whales and other mammals, sound is the foundation for finding food, company, and navigating through everyday life.

According to the NOAA, man-made sound waves can drown out the noises that marine mammals rely on for their survival, causing serious injury and death. Scientists believe that the sonar blasts cause the whales to change their dive patterns, leading to fatal injuries.

Naval sonar has been shown to disrupt feeding and other vital behavior and to cause a wide range of species to panic and flee. When confronted with naval sonar, whales will leave their local environment, out of fear.

“If the whales are not in an environment with a large enough food supply they will die,” said Paoli.

The deaths of the whales shed light on the bigger picture; human actions have unforeseen and often detrimental consequences for the environment.

“If the top predator is wiped out, there will be surplus of other fish, which could upset the balance of the ecosystem,” said senior Wesley Lim.

Paoli said, “In nature, a balanced, diverse ecosystem is healthy.  As we change things or as certain species die off, then we essentially affect all other species in that system. The short term impacts for humans may be insignificant, but long term we will eventually feel the effects.”