Deer leave more than just footprints in the community 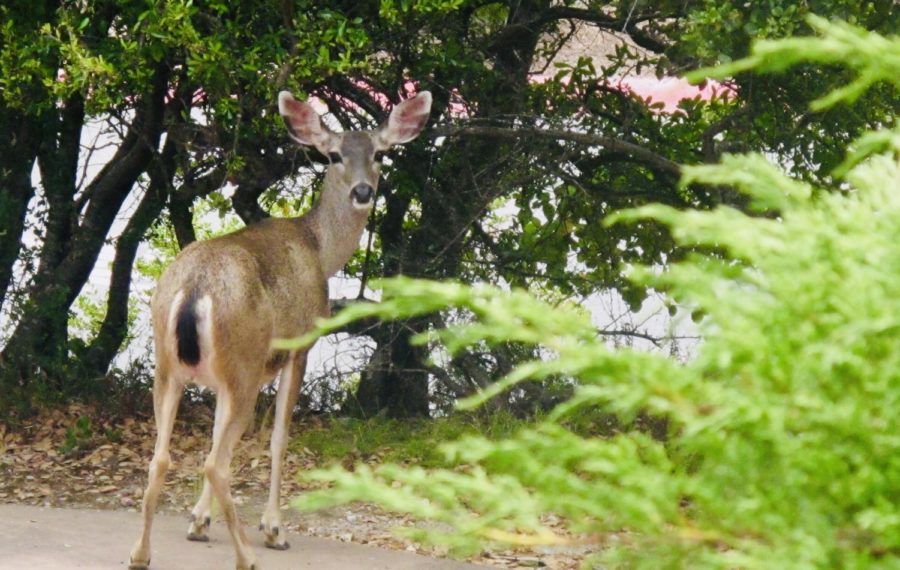 Deer in the Belmont and San Carlos area wander into peoples driveways and yards.

Deer: creatures known to be gentle, to coexist with nature, and now, to be close neighbors of local Belmont residents.

For years, deer have walked the streets of cities across the nation. Homeowners in these cities are faced with the problem of deer in their yards that destroy the existing vegetation and defecate on lawns.

According to the Internet Center for Wildlife Damage Matinence, deer can negatively impact the community in a variety of ways, such as inflicting personal property damage and spreading disease.

Many Belmont residents find the damage done by deer is noticeable and especially harmful to what they are growing.

“Deer eat everything in our yard, so we gave up on planting. They killed off all our actual plants, so now it’s just weeds,” said Samantha Turtle, a Carlmont sophomore.

Deer are herbivores, meaning they gain their nutrition from plants, fruits, acorns, and nuts, so the primary reason deer come into people’s yards is for food.

“[Deer come onto my property] usually to find something to eat. One day when we pruned the trees and we had a lot of branches on the ground, we had a lot of deer coming to eat the leaves that they normally can’t reach,” said Laura Roden, a Belmont resident.

Apart from their destruction of plants, deer carry ticks and disease that are often harmful to animals and sometimes even humans.

“The deer haven’t knocked down any fences or hurt any of the landscaping, so the only effect they have really had is ticks, which I do worry about,” Roden said.

Though small measures have been taken to clear deer from pathways and areas frequented by cars and people, there is still much to be done.

“Oftentimes in the morning when I arrive, the deer will run out in front of the cars or there will be deer running around in the staff lot. We’re always very concerned.  I will see teachers who arrive a little earlier and they are trying to shoo the deer back into the fence,” said Tiffany Jay, a Carlmont English teacher. “[To fix this problem] maybe the fences could be reinforced with stronger or smaller chain lengths.”

A very serious problem local residents have to face is car accidents caused by deer. Although the contact between deer and humans is limited, on rare occasions, collisions between vehicles and deer have occurred.

According to The Humane Society of the United States, precautions can be taken to avoid accidents, such as increasing individual awareness and implementing new technology and structures.

Despite the difficulties, Jay finds the most important thing with having the deer living among humans is to protect and keep them safe.