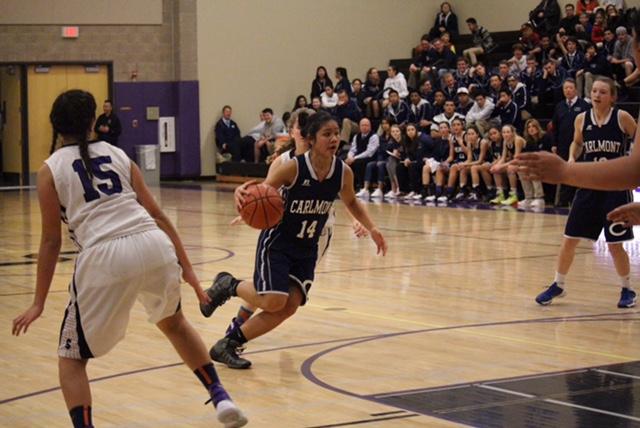 Junior Alexa Bayangos dribbles the ball down the middle of the key.

The game moved quickly, the Scots taking the lead right away when freshman Jayla Chee won the jump. Carlmont started out strong by moving their feet on defense, causing lots of deflections and turnovers for the Sequoia Cherokees. The Scots’ tough defense led to many successful offensive plays because their defense earned them more possessions.

In just the first quarter, the Scots shot four free throws, two three-pointers and many offensive put-backs, giving Carlmont a 23-7 lead by the end of the period.

“I think the girls are distributing the ball really well, and the passing is good. In my opinion, they should get the ball to the shooters more to get more shots off,” said senior and Screamin’ Scots member Spencer Stewart.

Junior Alexa Bayangos led the Scots by scoring over 16 points throughout the game, 12 of them being from three-pointers. She also made a significant difference on the Scots offense in driving to the basket and getting the ball successfully to her teammates with her smart ball handling.

“For my shooting, I credit my teammates who did a great job looking for me on the court and screening for me when they knew I had a hot hand. For our defense, we really just focused on their best [Sequoia] players and did a great job on shutting them out,” said Bayangos.

Even without a strong showing of Carlmont fans in the crowd, the team played to their full ability during the first half. With strong defense paving the win for them, their offense followed. Sequoia continued to foul, giving the Scots more chances to score baskets at the free throw line.

By the second half of the game, Carlmont led 38-12. The girls came back out on the court after half time ready to finish the game. However, during the third quarter the Scots grew tired, resulting in sloppy passes and giving the Cherokees more possession. Carlmont still came through though, running the court to get back on defense and stopping Sequoia’s offense.

Even with the few mistakes made by the Scots in the third quarter, their defense was able to pull through, earning them a 28-point lead by the fourth quarter.

With the starters on the bench, Carlmont’s reserves came in to finish out the game. They continued to have tough defense, draw fouls and make their way to the basket, getting them an even bigger lead with their offensive put-backs, resulting in their victory.

“Our defense is definitely a leading factor in why we had such a lead. We couldn’t have won without them,” said varsity assistant coach Shannon Mac.