Demonstrators call for rejection of Gorsuch 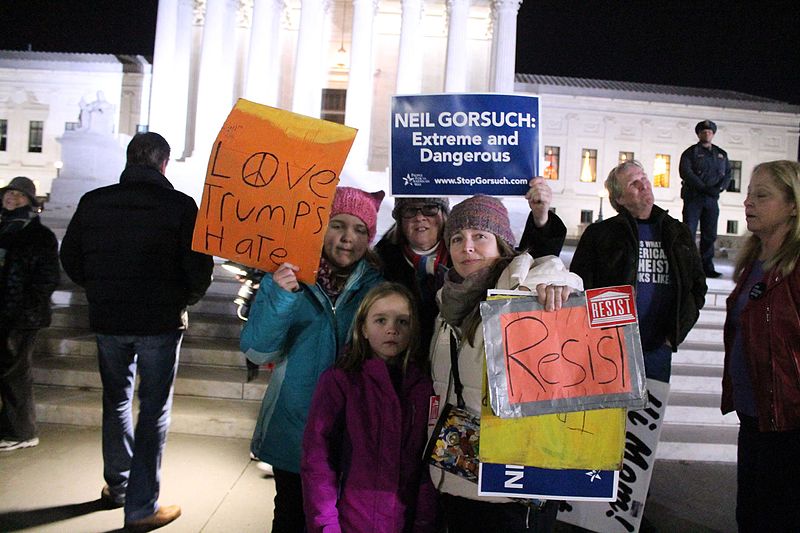 In San Francisco, a small force of white canvas tents and demonstrators gathered at the steps of Justin Herman Plaza. Displaying signs that said “We Object — The People’s Defense,” the participants were part of a movement in 13 cities across the United States called “The People’s Filibuster.”

They were there for one reason — to ensure that Californian senators did not give their support to Supreme Court nominee, Neil Gorsuch.

When former President Barack Obama nominated Merrick Garland for his Supreme Court pick in March 2016, Republicans had stoutly rebuffed the nomination. Many enraged Democrats had then accused Republicans of playing by party lines.

These roles are now switched.

President Donald Trump has nominated Neil Gorsuch, and Democrats are insistent upon refusing him as a replacement to the deceased Justice Antonin Scalia.

“I think the Democrats are totally justified to try and oppose the nomination of Gorsuch,” said Sam Fields, a junior. “It’s wrong for Republicans to try to refuse us the ability to do so, especially when they refused our attempt to nominate Garland.”

Demonstrators cited of Gorsuch’s previous stances on past cases he had ruled on as to why they did not support his nomination.

According to “The People’s Defense,” a group that was organized solely to oppose Trump’s nominee, Gorsuch shouldn’t be supported because he has “a history of ruling against women and families,” is a “staunch opponent of marriage equality,”  has “repeatedly ruled in favor of corporations,” and is “hostile to the groups fighting for rights and justice.”

Despite being nominated by Trump, Gorsuch has not declared his support for any of Trump’s declared stances. During Senate hearings screened immediately after his nomination, Gorsuch decided to keep many of his own opinions hidden because he believed that it was not appropriate for him to disclose them but promised that he would make decisions independent of party lines.

In particular, many of the protestors were worried about Senator Diane Feinstein’s vote. At the time of this writing, Senator Feinstein has only questioned Gorsuch on his stance on Roe v. Wade as a historical precedent but has remained undecided as to whether or not she will support his nomination.

To reach their filibuster threshold, Democrats will need to ensure that Gorsuch does not obtain 60 votes from the Senate.

“I definitely support the fact that Gorsuch plans to make decisions independent of party,” said David Chong, a junior. “However, I am worried about how his rulings in prior cases would transition into the Supreme Court.”