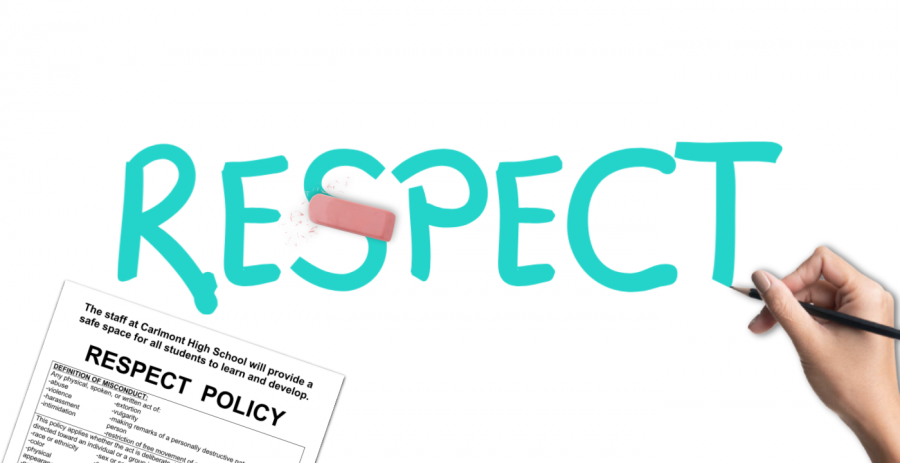 In the contest, students create posters and slogans to spread the ideals of Carlmont’s Respect Policy.

Amidst a turbulent time of discord and hatred, respect and acceptance have become increasingly necessary. As the school year concludes, students have been encouraged to submit slogans and posters to help remind themselves and others of Carlmont High School’s Respect Policy.

“We are holding a student design contest for posters, slogans, and logos that express our Respect Policy,” said Principal Ralph Crame in an email to the school on April 23. “The final product will appear throughout the school in the form of colorful banners, free stickers, and other goodies. There will be a school-wide vote to decide on the winner.”

According to the guidelines, the contest’s purpose is to “spread awareness about what Carlmont values as a school.” Students wanted to bring awareness of the policy and how important it is for school culture and community, which was a major factor contributing to the formation of the contest.

“The Governance Council wanted to reestablish the meaning of respect in our own school environment,” said Seona Sherman, a junior who helped create the contest. “By making this a contest, we would be including students as a part of building the Carlmont community. I think it’s better for the designs and messages to come from students’ perspectives rather than just the Governance Council because students will be a part of building the culture on campus and will be projecting their own voices in the process.”

A display of student-made artwork is certainly a more engaging way of reinforcing the policy than a list of rules or a disciplinary warning from faculty. Given the diminished sense of fellowship on campus due to months spent at home, the contest is an effective way to unite students to remind them how much respect matters.

“I have no doubt that Carlmont students have a basic understanding of respect and the power of their words and actions, but I think that creating posters and content for them to actively promote just strengthens the culture on campus. This also helps spur discussions in classrooms about the topic,” Sherman said.

Students had until May 10 to submit their designs. Original submissions were to incorporate positive messages, elements from the Respect Policy, and the Carlmont logo. Additionally, there would be no grand prize or awards ceremony for the winner.

“Instead, we are planning on using the designated winner’s design elements exclusively,” Teacher Daniel Deasy, a member of the judges’ panel, said. “We may do something with the other contestants’ designs, but that is something we will look into next year.”

The sight of posters, fliers, and chalk drawings is within the norm on campus, but artwork based on the Respect Policy was never featured. Unfortunately, the Governance Council’s plans to offer a Respect Policy contest had not come to fruition sooner because the 2019-2020 school year was cut short.

“Janelle Kwofie, a student who graduated last year and sat on the Governance Council, started the conversation of updating the Respect Policy and incorporating it more in our campus culture,” said counselor Julia Smith. “The Governance Council kept this as an important agenda item throughout the year, with hopes of starting the 2021-2022 school year with a full-blown campaign.”

Given recent hate crimes and respect issues, the policy’s values also apply to the world outside school. These current events contribute to a more authentic understanding of why respect is essential at Carlmont, making now the perfect time for such a contest.

As of Monday, March 17, the voting period has commenced and will last until May 21. This will likely be the first of many Respect Policy contests, so make sure to be on the lookout for your favorite submission and another opportunity to participate next school year.