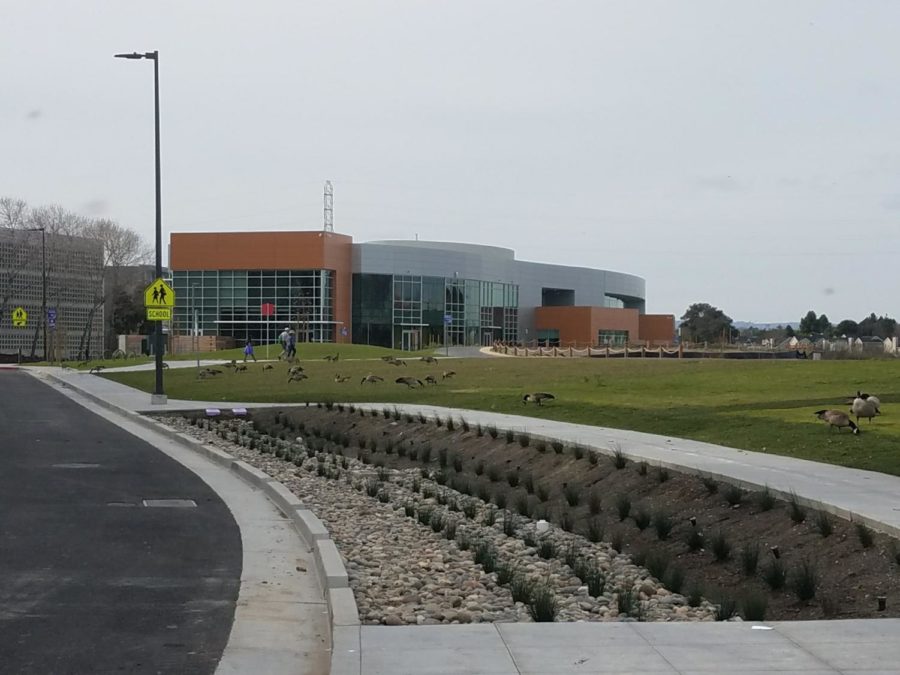 The new Design Tech campus can be seen as one drives down the road to Oracle.

Design Tech High School used to be a school without a campus. However, that all changed with the grand opening of Design Tech’s new location, situated in the marshes of Redwood Shores.

The high school, commonly referred to as d.tech, now operates in a two-story glass building. Plans for constructing the campus were unveiled in 2015, and the new campus was opened to the public on Jan. 9, 2018, according to the Oracle and Design Tech websites.

Hanna Landin, a freshman at Design Tech, said, “When I heard about the new campus, I felt excited because we now have this brand new school building built for us by Oracle, and it is in a beautiful location.”

Patrick Sullivan, an English teacher at Design Tech, said, “The new campus hasn’t affected my teaching style as much as my new classroom has allowed me to be more audible and malleable in how we approach activities.”

Landin is also comfortable with the new location.

“I love the new campus; we have actual walls so there’s no ambient noise distracting you as you try to do work,” she said. “The only challenge with adjusting to the new school is remembering where the classrooms are.”

However, Design Tech is not the only high school that has undergone construction. In August 2017, Carlmont unveiled its new S-wing.

Sophomore Alexis Shohet remembers the first days in S-wing and imagines how the students at Design Tech would react to their new school.

“I was really excited to have such a nice building at our school and really hoped I had classes in it,” said Shohet. ” I think [Design Tech] will enjoy their new campus.”

However, the new location is not the only new thing about Design Tech. In fact, the high school itself is fairly young as it was founded by Dr. Ken Montgomery in 2014.

According to its website, Design Tech’s mission is to help students “develop skills that are critical to success in the 21st century […] by building deep content knowledge and learning important problem-solving skills.”

With the new campus, Design Tech is closer to Oracle, a leading technology company. As more time passes, the Design Tech students and staff will have more time to adjust to the new location and campus.

Sullivan said, “I think that it is hard to make changes in general, especially mid-year, but I know that this change is worth it.”