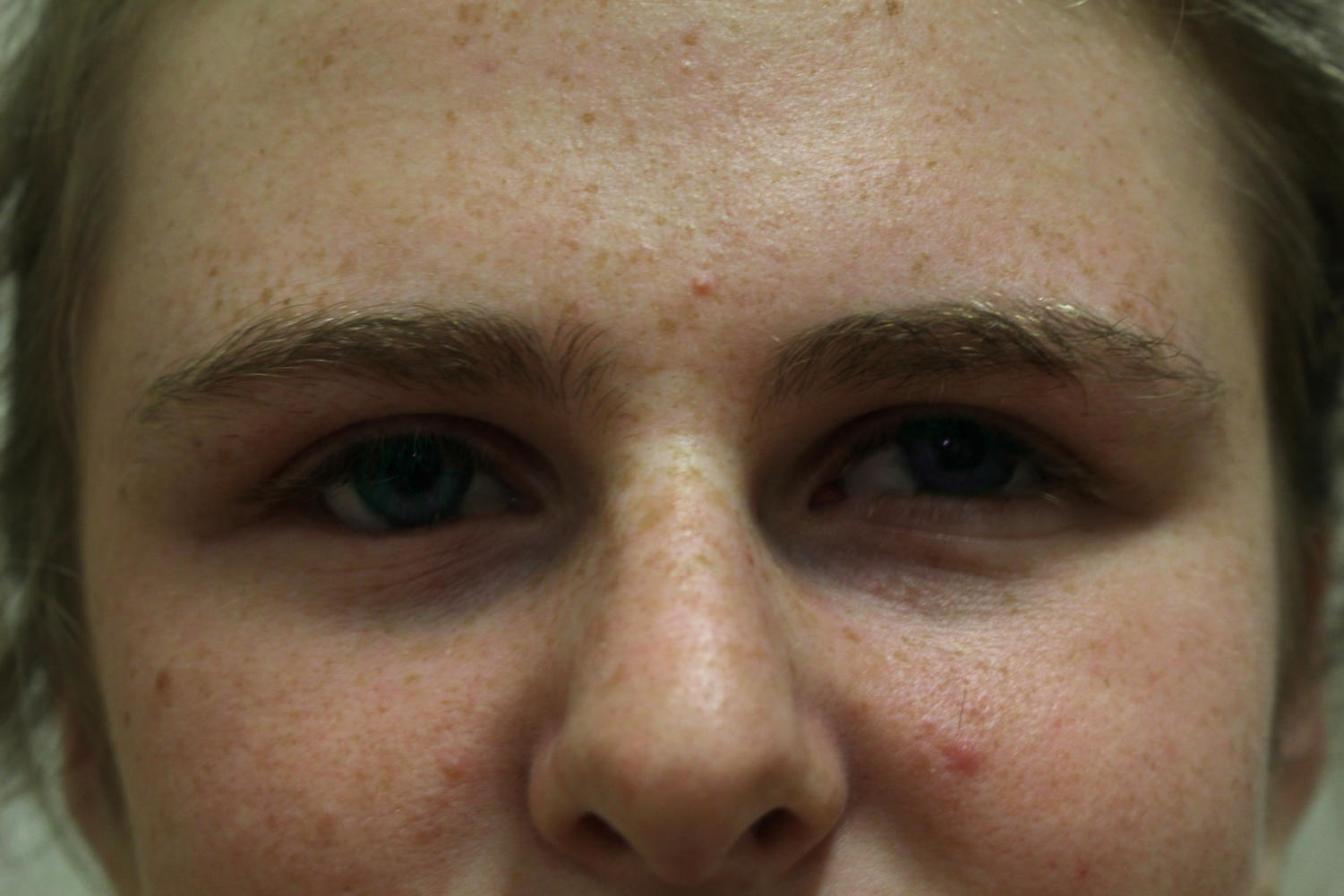 Despite her blindness, Rio Popper has huge visions for the future. (Anna Delmas)

Despite her blindness, Rio Popper has huge visions for the future.

Despite loss of sight, high schooler envisions and achieves

Rio Popper has no eyes.

When she was six months old, she was diagnosed with retinoblastoma, a very rare cancer that occurs in the retina of the eye. She is now one of the 20,000 children with this condition in the United States.

By age 2, doctors deemed it necessary to remove her left eye. When she was 5-years-old, she lost her right eye. According to the American Society of Retina Specialists, retinoblastoma can be caused by a mutation in the RB1 gene on chromosome 13. It can either be passed down by one parent or both parents or it can be a random mutation. Approximately 60 percent of retinoblastoma cases are due to spontaneous mutation, not having any connection to hereditary causes.

In addition to having retinoblastoma, Popper is one of 5,000 children with retinoblastoma that needed both eyes to be removed. Popper was then outfitted with glass eyes and was forced to learn Braille by her mother.

“My mom wanted to embrace this new identity as a blind person, but I just wanted to be a normal kid: make friends, go to school, and play with toys,” Popper said. “Using braille just didn’t fit into that plan.”

She learned braille when she was 2 and a half. Since then, she has chosen to use the same tools, including a computer, headphones, and a smartphone, as a sighted teenager as much as possible. For example, as a kid, she delved into all sorts of authors and titles using audio books. Both then and now, she is an avid reader. But she is one of the many blind people who choose to use a different method of reading, as only 8.2 percent of blind people use braille, according to the National Federation of the Blind.

Popper continued to relentlessly pursue her goal of being just like all the other kids. She decided at a young age that her lack of sight would never be an excuse for a lack of success. That has been her mantra — and those she knows see the results.

“Not being able to see could easily be used as an excuse for anything, but Rio has never used it to get around anything,” said Zach Rosenblatt, a freshman at the University of Oregon and a close friend of Popper. “The way she thinks analytically is like nothing I have encountered before.”

In first grade, she competed at the Nation Braille Contest and took home second place. But she is no longer active in the blind community.

“I think that a lot of blind people let their lack of sight define their personality,” Popper said. “I prove myself capable through everything I do, both academically and socially.”

Teachers have similarly attempted to fuel a life of compromising her education and using her lack of sight as an excuse. Popper recalls a time in 7th grade when a well-meaning teacher told her that “math is visual” and that “it’s understandable for you to struggle” because of her loss of sight.

“I wasn’t struggling. I’d gotten 100 percent on my last test. While math wasn’t my favorite subject, I was set to skip eighth-grade math and take the honors high school class,” Popper said.

The teacher told her that math would just keep getting harder as she moved up and that she should really consider not taking the honors track.

Proving her teacher wrong gave her a new found motivation. In eighth grade, she took accelerated geometry and Algebra 2 at Sequoia High School. And at the end of the year, she surpassed all the high schoolers, winning the Student of the Year award for the class.

She was also interested in creative writing and began exploring journalism at Sequoia. She was the second person in the history of her school to get an award at the National Journalism Convention as a freshman.

Sophomore year, Popper renewed her dedication to proving her normalcy. She signed up for AP calculus, continuing her academic growth. However, she also started exploring the high school scene. She began attending parties with her friends which helped prove to herself and others that she could be a normal teenager. Earning a score of 1570 out of 1600 on the SAT, she demonstrated her devotion to education and her hard work with SAT preparation was worth it.

“I would call Rio an academic warhawk,” said Dario McCarty, a senior at Sequoia High School. “In that, she’ll cut your throat for an A.”

She continued her academic achievements with her placement on the National Journalism Honor Roll. She also founded a literary magazine called All That’s Lit To Print, which won seventh place in Best of Show at the National Journalism Convention. She has retained the role of Managing Editor of the Raven Report and is the Editor-in-Chief of her literary magazine. Her continuation of the advanced pathway and success in math further cemented her interest and motivation to succeed.

Currently, she is in Calculus BC/IB higher level mathematics, which is changing her view of life through the scope of math.

“I’ve found that math provides a common language,” Popper said. “I met a physicist, and our common vocabulary let him explain his research to me. My music-loving friend wanted advice writing harmonies, and my mathematical vocabulary let us discuss it. Math enriches the conversation.”

Additionally, Popper applied to numerous Ivy League schools and early-action to Harvard. However, she has been accepted to and plans on going to Christ Church constituent college at Oxford University. She chose this college because of its prominent alumni, including 13 prime ministers, author Lewis Carroll, and John Locke.

She has achieved her goal of being normal, proven by her success socially and academically. But that’s not all that her life has in store.

For some people, a social life defines normal, and Popper still manages to find time for one with a boyfriend and a tight-knit group of friends.

Popper’s goal may have never been to inspire people, but she seems to find a way to without even trying. One of her closest friends, Lex Navarra, a senior, experiences that unintentional side effect of Rio’s friendship.

“Rio is the kind of friend that motivates you without trying,” Navarra said. “She’s really hard working and headstrong, and her determination to do well is something that rubs off onto me through our friendship.”

But the rain of compliments and admiration doesn’t end there.

“Rio is my best friend in the whole world, one of the best people I know, and has made me the person I am today,” said Lauren Stevens, a college freshman at Bard College at Simons Rock.

“I greatly admire how driven and focused she is on accomplishing the lofty goals she knows she can attain,” Rosenblatt said. “She has great people and communication skills, which I have personally witnessed throughout journalism and hanging out with her outside of class.”

That admiration doesn’t stem from her blindness. Rather, it is inspired by her work ethic and devotion to the people and things she loves.

Everyone struggles somehow in high school. It could be the workload, bullying, mental health issues, or maybe friend drama. It may just not be quite as discernible as Popper’s, or at least that’s how it seems from the outside.

“I’m blind, yes, but no, geometry wasn’t hard. Neither was calculus. Nor was coding a website or editing a newspaper,” Popper said. “Most concrete things don’t pose serious hurdles for me. The real challenge I face is people’s blindness fixation.” 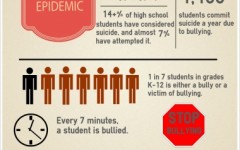 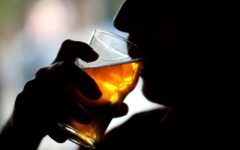 There is no upside to alcohol 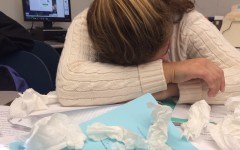 Homework gets prioritized over health 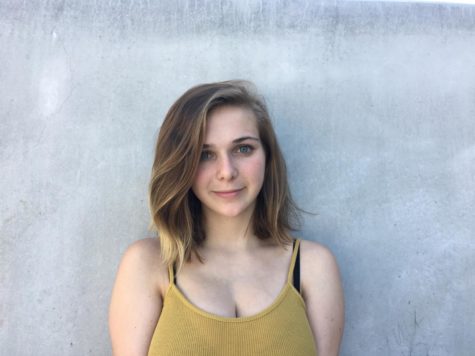 Anna Delmas, Staff Writer
Anna Delmas is a sophomore, and spends most of her time rock climbing, walking her dog, or doing homework. She is interested in neurology and hopes to pursue a degree in biology or chemistry. 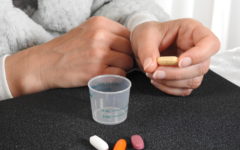 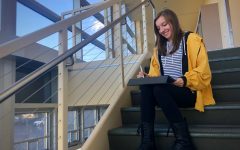 Alice Muir paints her own future 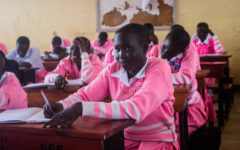 Bras uplift the spirits of some but not all 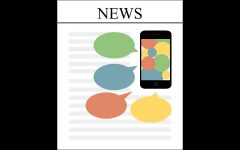