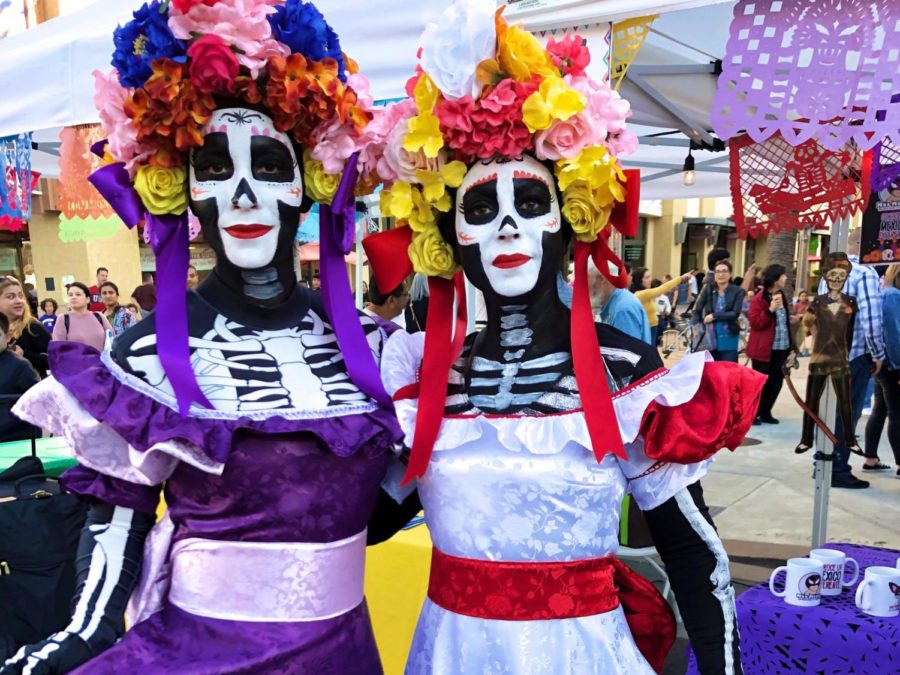 A duo of Catrinas pose for the camera as the crowd gets their attention.

The Redwood City Dia de los Muertos festival brought together the Hispanic community to celebrate a meaningful occasion in their Latin heritage.

The non-profit organization Casa Círculo Cultural was responsible for coordinating the event on Nov. 3. Their mission is to promote the community’s understanding of Spanish history through cultural activities such as the Día de los Muertos festival and Spanish immersion classes.

According to History, Dia de los Muertos dates back over 2500 years to a historic Aztec belief that dead souls are in a place called Mictlan and can only return home to their family and friends on this day. Dances, drums, and songs are performed to welcome them.

One dance that’s typically performed during the festivities is known as the Mexica. It features a man with a towering feather-headdress and a flute. Herardo Salinas, the Aztec captain of this dance, wears emptied nutshells filled with stones on his ankle to create a maraca-like sound.

“The noise is asking their ancestors to dance with us. It helps us connect with our ancestors and celebrate with them since they only visit once a year,” Salinas said.

Elegant ladies of the dead painted to look like skeletons walked silently through the crowds. Because they represented the souls of the dead, they were prohibited from talking or smiling. Known as Catrinas, they wore colorful traditional dresses and fancy floral headpieces or hats.

According to the Cultura Colectiva, the political cartoonist José Guadalupe Posada first created the Catrinas in 1910. Later, the famous artist Diego Rivera popularized them and made Catrinas a Dia de los Muertos tradition. Catrinas symbolize the idea of welcoming death as part of the natural cycle of life.


In American culture, some might relate the holiday to Halloween. However, Conception Jimenez, who has 20 years of experience making altars for the Day of the Dead, describes the vast difference between the two.

“Día de los Muertos is not a Mexican Halloween. It is not meant to be morbid or scary, but rather, happy because we are bringing back our ancestors,” Jimenez said.

Día de los Muertos is an opportunity for the Hispanic community to showcase their cultural traditions to the world and to educate people from all different backgrounds about the history of the unique Mexican holiday. Families look forward to the Day of the Dead to welcome their loved ones back and to celebrate the circle of life.

“The Hispanic community is empowered to show off all the positives of our culture through this event,” said Gloria Solsis, a first-time attendee.