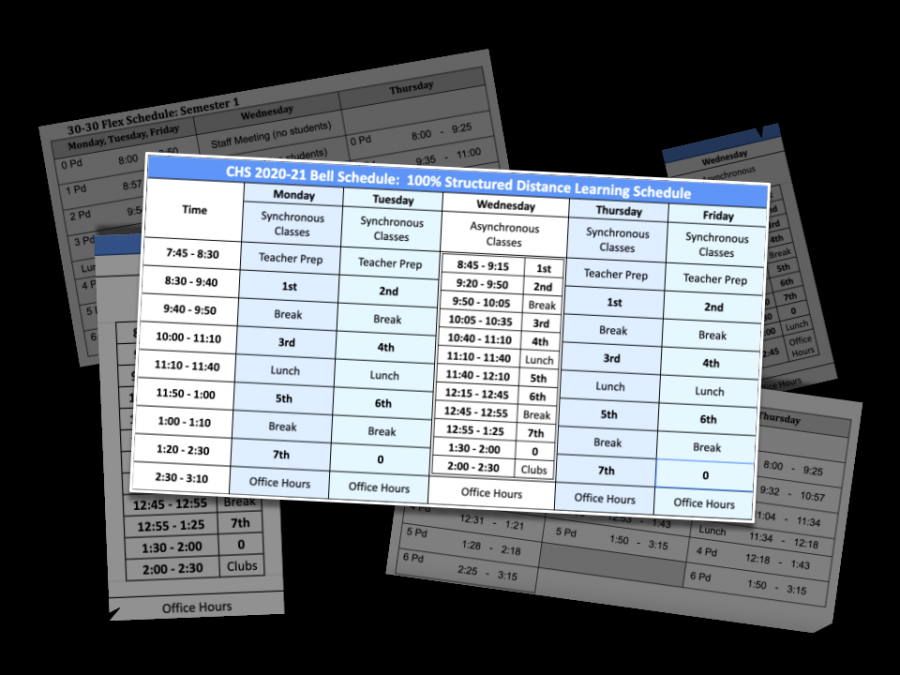 The bell schedule remains the same as some of Carlmont's students come back to learn on-site.

Carlmont High School is returning to in-person instruction, accommodating groups at 25% capacity on Monday, April 5. Despite the students’ return to a conventional school environment, the administration has no intention to switch from the old distance learning schedule.

The distance learning bell schedule, implemented at the beginning of the 2020-2021 school year, consists of 70-minute lessons and an asynchronous day in the middle of the week. This schedule differed from its predecessors, as it did not include block classes or “flex” periods dedicated to independent student studies.

The schedule, used during weekdays other than Wednesday — an asynchronous day without concurrent instruction — consists of three 70-minute classes, 20-minute breaks, and 30-minute lunch. Periods one, three, and five are held on Monday and Thursday, and periods two, four, and six occur on Tuesday and Friday each week.

This schedule mirrors that of distance learning to eliminate confusion and allow teachers to teach classes with both virtual and in-person participants.

“The bell schedule will no be different,” said Principal Ralph Crame. “We will use the existing bell schedule for the remainder of the year, including the 20-minute passing periods.”

The choice to keep the schedule from distance learning, though the best for accommodating all students, is worrisome to students who worry about the fatigue that comes with the longer periods in an in-person setting.

“I think having the distance schedule at school is going be strange,” said sophomore Athea Koester. “It makes sense to do it at home, but having that schedule on campus might be tiring.”

Though some are concerned, the distance bell schedule will not be exercised for much longer. With less than three months before the end of the 2020-2021 academic calendar, the Carlmont staff is already working to create a new schedule for the next school year.

Despite mixed feelings about the schedule, Crame believes that using the distance learning version rather than developing a new one is the most practical option for the administration

Admittedly, certain elements of past schedules, such as Flex periods, are not entirely necessary to resume learning face-to-face with a teacher. Since the 25% of students coming back will not be on campus every day of the week, there remains plenty of time to study, consult with teachers, and complete their work.

“Flex period worked well for me last year, but with the way things are right now, I don’t think it needs to return. Maybe in the future,” Koester said.

The formation of another new bell schedule underway, but uncertainty for the future of the pandemic and county health surround its creation. Despite these obstacles, the Carlmont community has shown its ability to adapt to unexpected circumstances and will undoubtedly be able to do so when returning to school and into the future.