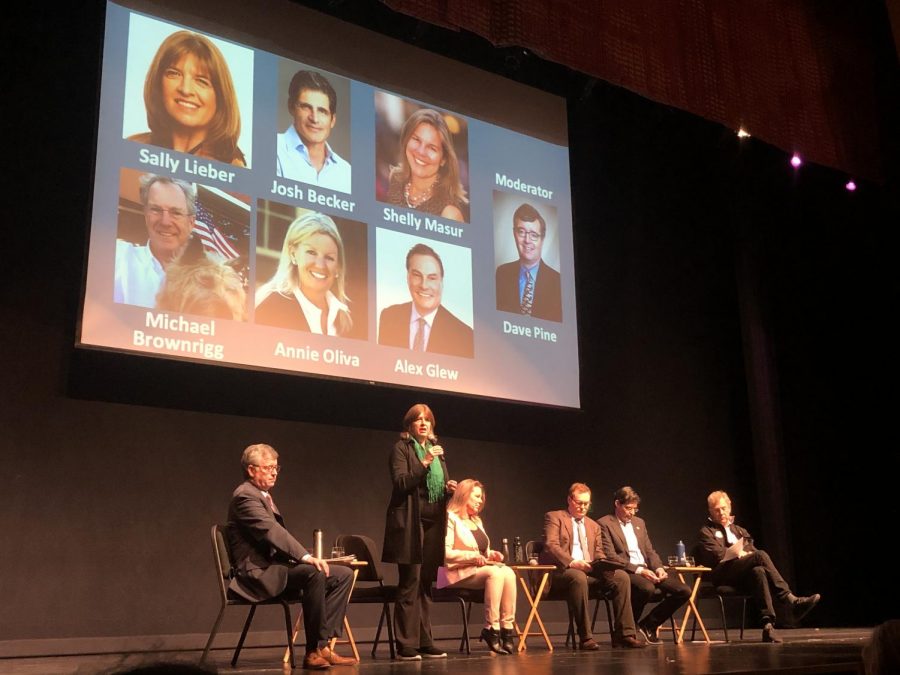 Candidate Sally Lieber shares her opening statement as the other candidates and the moderator of the event sit and listen.

The bustling crowd filed into the theatre as people anxiously awaited the candidates’ arrival to the stage.

Moderator Dave Pine, a climate and environmental advocate of San Mateo County Board of Supervisors, entered the stage as the crowd’s conversations came to a halt. He introduced the night’s main sponsors, Citizens’ Climate Lobby, 350 Silicon Valley, Sustainable San Mateo County, and Acterra Action. Following the introduction of the sponsors, he welcomed candidates Sally Lieber, Josh Becker, Shelly Masur, Michael Brownrigg, and Alex Glew to the stage, as well as mentioning the final candidate Annie Oliva, who was unable to attend the event. The candidates were there as a part of the Climate and Environment Forum for California Senate District 13 held at Menlo-Atherton High School on Jan. 15.

Pine then announced how the night would proceed: each candidate would have two minutes to make an opening statement, followed by a round of pre-prepared questions, then finishing the evening with a lightning round of audience questions and answers.

After the first questions were asked regarding the candidates’ top three priorities for helping the climate, Masur started off the discussion.

“First, [I would focus on] public education, teaching kids and helping them make decisions about the future of our state. Number two is public health because if we are not addressing the impacts of climate change, we are going to continue to erode the health of our communities. Housing and transportation are third because we have to move to death housing and build our public transportation infrastructure,” Masur said.

The conference then proceeded to Glew, the second candidate.

“My top three priorities are reducing the cost of healthcare, environmental issues specifically with factories and gas analysis, and more efficient mass transportation, which are all linked,” Glew said.

“Climate is the top priority because the future depends on the urgency with which we act. I think I can help us move rapidly while understanding how to do this economically. After it would be transportation and housing solutions and education,” Becker said.

Like Becker, Brownrigg also focused on climate change and housing.

“[I will focus on] affordability for our district for housing and transit, climate for our planet, specifically zero-carbon energy for our state, moving this goal from 2045 to 2030, which will cause the rest of the developing world to proceed at a faster pace, and education for our state. We need to protect our district, which is at the greatest financial risk to sea-level rise,” Brownrigg said.

Meanwhile, candidate Lieber focused more on the needs of education and lifting others up from poverty.

“Addressing climate crisis and collapse has to be job one as it’s an existential crisis for humankind. The Bay Area is ground zero for the impacts in so many ways, mainly sea-level rise. I also want more of an emphasis on economic and environmental justice and o[ppurtunity, as we can’t succeed with 25% of children in California in deep poverty. We need to get California out of the bottom five in education funding and into the top five,” Lieber said.

Once the candidates had all shared their views on what their top three priorities would be, Pine asked what exactly they each would do as a senator to speed the transition to a low carbon economy by 2030.

“We need to strengthen our cap and trade system with a quality-adjusted price target, improve our renewable energy standard, and use carbon-negative building materials,” Becker said.

Brownrigg disagreed with Becker’s statement to an extent, as he says he believes the approach must be more aggressive.

“I would establish a blue-ribbon task force, that environmentalists, engineers, and finance people and give them one year to come up with how to create 10 gigawatts of clean energy, and we need to sequester carbon through smart agriculture and tree planting,” Brownrigg said.

Lieber, however, has a direct plan of her most significant step towards the overall goal of getting to a low carbon economy. She believes the best way to proceed with this is to leave the fossil fuels in the ground through an absolute ban on fracking and any injections of poisonous chemicals or water into the field.

Masur believes all of the carbon neutrality goals could be achieved by one action.

“Assemblymember Gloria introduced a bill that would have declared a climate crisis in California, which would have moved all of our carbon neutrality goals to 2030, showing that we need to pass that bill,” Masur said.

On the other hand, Glew focused less on legislation and more on technology.

“We need cars and transportation that use less energy, starting with lighter vehicles such as aluminum cars and hybrids. Overall electric power must be used more,” Glew said.

With ambitious and differing courses of action, these candidates will all have their work cut out for them. Following the March 2020 elections for the District 13 Senate chair, people hope to see changes and progress away from the climates warming crisis.