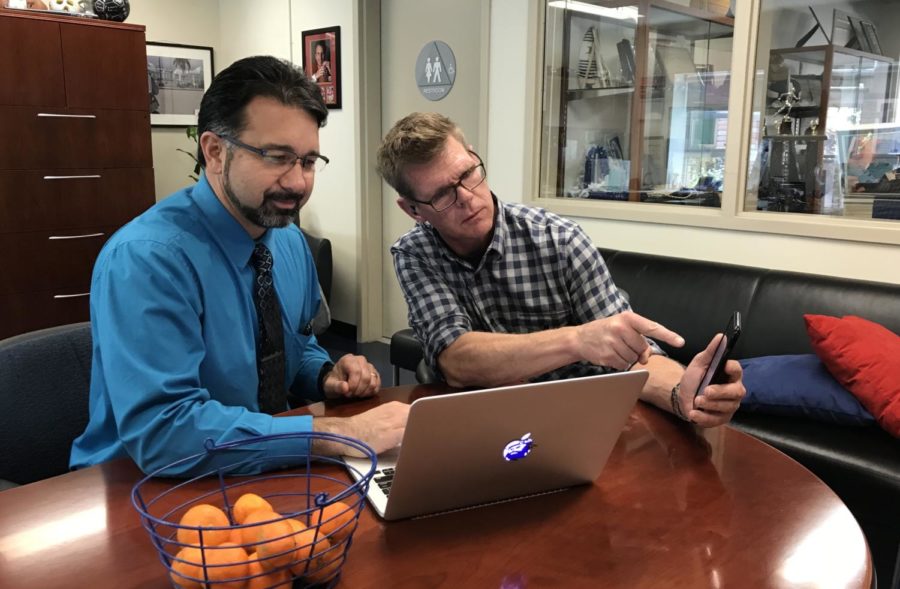 Principal Ralph Crame and Administrative Vice Prinicipal Grant Steunenberg discuss the Bark program and its effects on the school.

Technology has become increasingly more significant in student lives over the past decade or so. As a result, Carlmont provides Chromebooks as well as Wi-Fi to students on campus.

In order to ensure that students are using these resources safely and appropriately, Carlmont has implemented a new monitoring system in order to observe student online activity on their school accounts.

“If students are using their student accounts, it’s taking in all the information they’re using. Then, what Bark does is it filters all that information to see if there are any concerning word searches, anything that could potentially be threatening or inappropriate material,” Steunenberg said.

Bark, founded in 2015, is a site primarily marketed towards parents who want to monitor their children’s online activity. However, they also offer their services to schools.

“Bark gives their product to schools for free and so, with that being the case, we just put it on. They don’t have a very sophisticated way of filtering just yet. So anything they deem as profanity, violence, drug-related, or anything related to suicide or self-harm, they’re going to flag,” said Robert Fishtrom, the director of technology for Sequoia Union High School District (SUHSD).

Carlmont currently has a similar system within the firewall of their Wi-Fi. However, that system can only filter content if a user is signed into the Wi-Fi. Bark allows the district to monitor activities on school accounts, wherever the user is. Once one of the monitors receives a notification, they have access to the whole conversation.

“Within that program, we have a button that we can click that says ‘most severe’ and it will then filter out most of it and leave behind what it sees as the most severe,” Steunenberg said. “Often times, there are no severe things that are filtered and we just move along. It gets a bit tedious. That’s why we really only focus on the ones that are the most severe and even those, to be honest, have been pretty class-related and they’re not anything to be concerned with.”

The system has been installed since the beginning of October. Fishtrom and Eric Trice, SUHSD’s programming web and service manager, presented the idea to the various principals in the district.

“Mr. Trice learned about it and he and I together talked to the principals and vice principals before we did it,” Fishtrom said. “We want to make sure students are making responsible choices online.”

Neither Carlmont’s nor the district’s administration is worried about violations of student privacy.

“In the Ed Code, it actually states that we have to monitor school-issued devices or accounts [issued] to students to use in the educational setting. There is Education Code around making sure that we’re maintaining a safe environment for everybody,” Principal Ralph Crame said.

According to them, the technology agreement signed by the students allows the administration to have access to the student accounts.

“When students signed the internet use agreement, they agreed to the terms of being a student at Sequoia Union High School District, so you say that you understand what is an appropriate use,” Steunenberg said.

However, staff and adults with the seq.org extension are not monitored under this system.

“We are not monitoring staff accounts. We don’t think that’s going to be a problem. In reality, when the staff signed the technology use agreement, all the accounts and documents produced are owned by the district. So at any time, the district has the right to go into an account as needed, including adults,” FIshtrom said. “If there is a situation where a teacher is accused of something, we sometimes enter their email account and investigate the accusation.”

When asked about the new monitoring system, many students were mildly concerned about its effectiveness.

“I’m not sure [if it’s going to be that effective]. A lot of people joke about the kind of things that [the system] will see as suspicious but are actually fine. They’ve already been monitoring [our activity] on the Wi-Fi, so it doesn’t really make much of a difference,” said Jackie Zuckut, a sophomore.

Many also pointed out how the system could easily be bypassed.

“Many people have enough sense not to send something [incriminating] over a school channel, they would most likely send it over a private channel. So, it won’t really help too much,” said Kevin Moy, a junior.

Not many students are too concerned about it being an invasion of privacy either.

“I think it’s definitely the schools right to filter their content since it’s done on their accounts, after all,” freshman Lorenzo Wolzcko said.

Similar programs at other schools have been very effective at stopping concerning behavior at school.

“I have a colleague who is the superintendent for LA county. The product they use has actually saved lives. There was a student who wanted to commit suicide and she put it in an email to her friend, it got flagged, and the company called,” Fishtrom said. “The administration got there in time to save a life.”

Currently, SUHSD is working on better integrating student opinions into their technology policies during their Technology Task Force meeting on Nov. 28 at the district office in Redwood City.

It’s imperative that schools find a balance between privacy and safety while using technology.